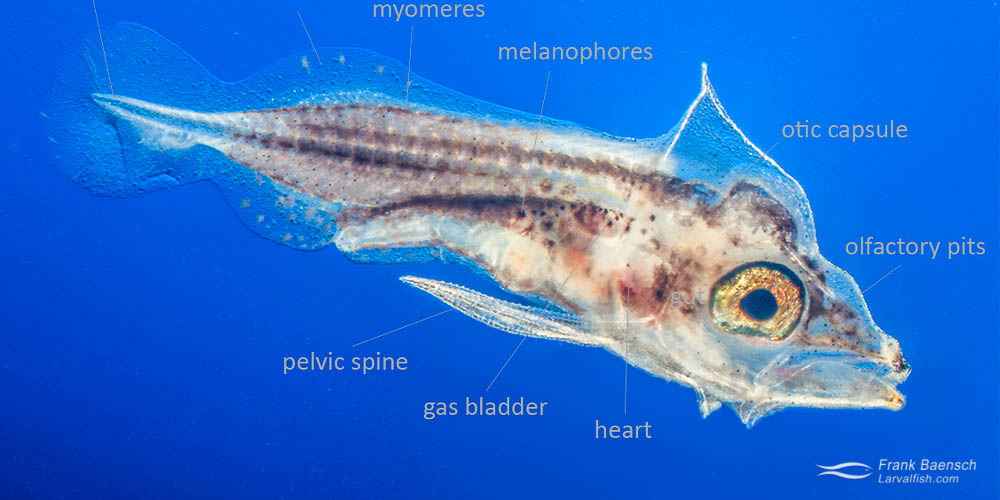 adhesive egg – an egg which adheres on contact to substrate material or other eggs, adhesiveness of entire egg capsule may or may not persist after attachment.
benthic – living on the bottom.
demersal – bottom oriented; demersal eggs develop on the ocean bottom.
early life history – developmental stages from birth to the juvenile stage.
first-feeding – stage at which a fish larva has consumed much of its yolk and is able to capture prey.
flexion – a stage or process in fish larval development that starts with the upward bending of the notochord tip and ends with the development of rays and hypural bones in the formation of the caudal fin.
gas bladder – swim bladder; a gas filled sac  located in the abdominal region below the spine in teleost fishes that contributes to buoyancy control.
hypural bones – a series of caudal fin bones that support the caudal fin rays.
juvenile – the development stage from completion of fin and scale development to sexual maturity; usually follows the larval stage.
fish larva – the life history stage from hatching to juvenile transformation (fin ray and scale formation has been completed) ; can further be subdivided into pre-flexion, flexion and post-flexion; most marine fish have a larval stage largely to facilitate dispersal.
leptcocephalus – the slender, transparent, slender larva of eel associated fishes; usually have a small head and pronounced teeth.
life history – developmental stages from birth to death.
melanophore – a cell that contains the pigment melanin (black or brown); located on the fish epidermis and capable of changing size, shape and color through expansion and contraction; used in identifying fish eggs and larvae.
metamorphosis – transformation from the larval to juvenile stage; loss of specialization for pelagic life, completed scale and fin ray development and acquisition juvenile form and color.
myomeres – serial muscle bands in the larval body approximately equal to the number of vertebrae in adults.
notochord – cartilaginous rod that support the larval body and later developed into the vertebral column.
oil globule – one or several small spheres of oil within the yolk-sac of fish larvae; size, number, position and color of oil globules is variable and so a useful character for identification.
oviparous – producing eggs that develop and hatch outside the body of the female.
oviviparous – animals that retain the eggs within the body of the female in a brood chamber in which the development of the embryo takes place, perhaps deriving some nourishment from the female, but without the strong umbilical attachment to a placenta as in mammals; the typical condition of so-called “live-bearing” fishes. Also called aplacental viviparous, as the young hatch inside the mother’s uterus from their thin egg capsule, and are usually born shortly afterwards.
pelagic egg – egg which floats freely in the water column, often slightly positively buoyant.
plankton – organisms that live in the water columns and are incapable of swimming against current (include drifting animals, plants, archaea, algae, or bacteria); microscopic to large size (jellyfish); crucial part of the food chain.
postflexion – the stage in fish larval development from formation of the caudal fin (flexion) to completed development of fin rays and scales (juvenile).
preflexion larva – the stage in fish larval development from hatching to upward bending of the notochord (flexion).
protandrous hermaphrodite – a sequential hermaphrodite were an individual is born as a male and will change to a female.
protogynous hermaphrodite – a sequential hermaphrodite where an individual is born as a female and will change to a male.
pterygiophores – the bony or cartilaginous elements that form the connecting points for the dorsal and anal fin rays.
reproductive strategy – ways a species invests its energy to produce viable offspring.
settlement – the developmental phase when a fish free-swimming larvae are juvenile adopts a substrate associated life style; settlement often but not always occurs with metamorphosis.
total length– the length from the tip of the snout to the tip of the longer lobe of the caudal fin, usually measured with the lobes compressed along the midline. It is a straight-line measure, not measured over the curve of the body.
viviparous – live bearing of young (as opposed to laying eggs); embryo develops within the ovary, receives maternal nutrition and is born from within the parents females body as a juvenile.
yolk – nutritive material – (phospholipoprotein) nutrition for the early developing larva located in a sac-like mass (yolk-sac) below the abdomen which diminishes  as the larvae become more self-sufficient and start feeding.
yolk-sac larva – a stage or process in early larval development from hatching to complete exhaustion of the yolk.