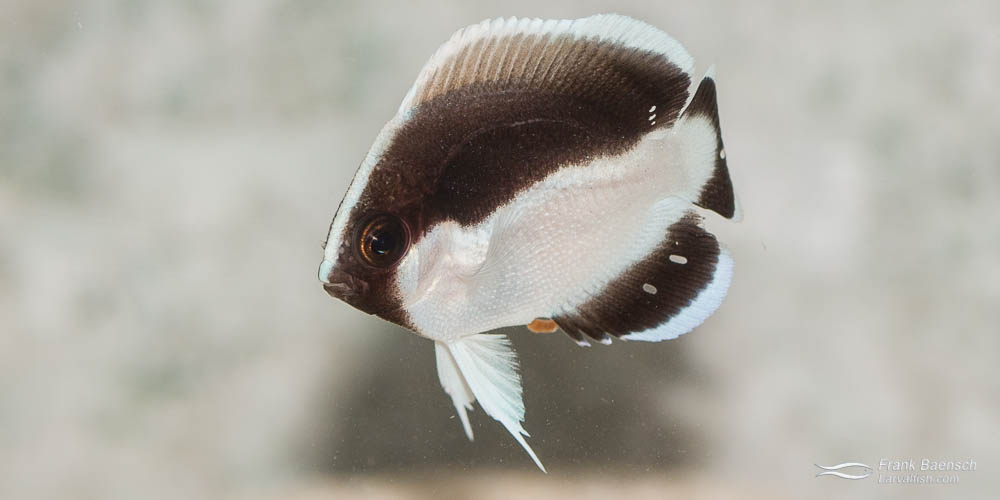 The Bandit Angelfish (Apolemichthys arcuatus) is one of eight medium sized marine angelfishes (Pomacanthidae) that comprise the Apolemichthys genus.  This species is named for its striking black and white color pattern and is endemic to the Hawaiian Islands and Johnston Atoll. It can be found singly or in pairs inhabiting rocky reef faces and slopes most commonly at depths between 60 and 400 feet, where it feeds almost exclusively on sponges. The attractive color pattern, docile nature and rarity make bandit angels expensive fish in the aquarium trade (retailing upward of $600). Unfortunately, adults generally do not fare well in captivity due to their complex dietary requirements, refusal to accept aquarium foods and decompression related maladies. Juvenile and sub adult bandits are known to adapt better to aquarium life but are secretive and not common within scuba depths and therefore rarely collected.

A. arcuatus was captive-bred at the Reef Culture Technologies hatchery on two occasions in 2006. Eggs were obtained sporadically from a mated pair after considerable conditioning in the hatchery. The eggs are spherical, colorless, contain a single oil globule and measure 0.85 mm in diameter (Centropyge eggs average 0.75 mm). The larvae develop similarly to Centropyge species with minor differences in pigmentation and morphology. Newly hatched A. arcuatus larvae are positively buoyant and have a large yolk-sac that extends past the head, unpigmented eye spots w/out lenses, no discernible mouth or gut, and measure 1.4 mm total length.  By 3 dph the A. arcuatus larvae have fully pigmented eyes, an open mouth and anus and are able to capture copepod nauplii. Preflexion A. arcuatus larvae are moderate bodied and pigmented red. Postflexion A. arcuatus larvae develop a deep, silver, laterally compressed body. Noticeable darkening of the soft dorsal and anal fins marks the beginning of settlement (near 40 dph). Settlement is completed near 60 days post hatch. A. arcuatus larvae are delicate and will only survive when fed quality copepods in a stable rearing environment.

Similar to Centropyge, the A. arcuatus biology creates various bottlenecks that need to be resolved to mass culture quality juveniles. However, given the demand, high price and poor track record of wild Bandit Angelfish, investing in further aquaculture research of this species is more than worthwhile.

Karen Brittain, Oahu, Hawaii has been producing Bandit Angelfish (Apolemichthys arcuatus) for the aquarium trade since 2015.