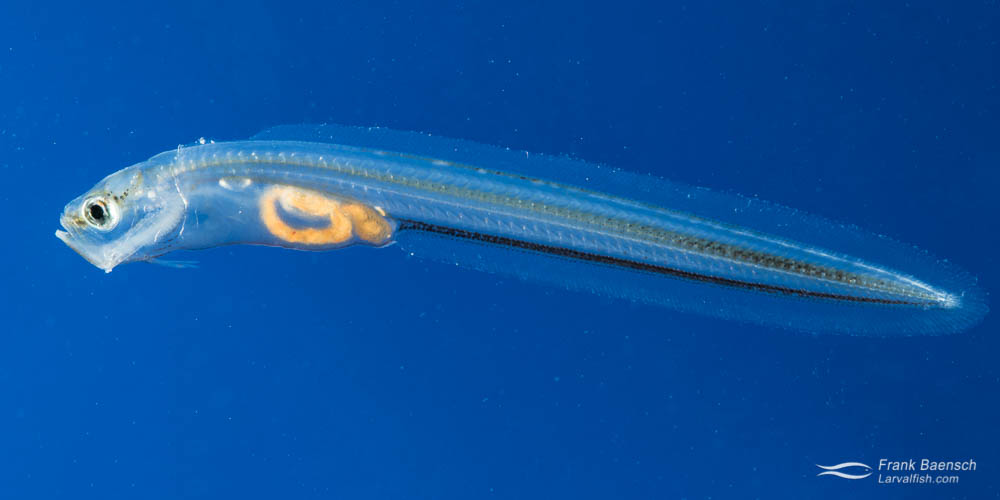 The cusk eel family, Ophidiidae, is a group of eel-like marine bony fishes comprising about 30 species. Some cusk eels are found in shallow water, but most are deep-water fish. One cusk eel species, Abyssobrotula galatheae, was recorded on the bottom of the Puerto Rico trench at 8,370 m (27,460 ft), making it the world’s deepest recorded fish!

The pelvic fins of cusk eels develop into forked, barbel-like organs below the mouth. They are not related to true eels, which lack pelvic fins all together.  Cusk eels produce pelagic eggs (either singly or in a gelatinous mass), unlike their close relatives, the brotulas (family Bythitidae) that bear live young. The largest cusk eel species, Lamprogrammus shcherbachevi, grows up to 2 m (6.6 ft) in length, but most species are shorter than 1 m (3.3 ft). A few larger cusk eels are prized food fish. Efforts are underway to farm the red cusk eel (Genypterus chilensis) in Chile.

Three juvenile blackedge cusk eels (Ophidion muraenolepis) were cultured from a few eggs collected in Oahu’s coastal waters in March 2018.  O. muraenolepis is a small (up to 15.5 cm/6”) substrate burying species that occurs at depths of 80 – 370 m (240-1170 feet) in the Pacific Ocean. The neuston tow also collected eggs from many other species; including tilefish, morays, chubs, cornetfish, butterflyfish, anthias, dragonets and parrotfish. This mix of larvae was raised together on copepods (Parvocalanus sp.) and rotifers. On day 16, three cusk eel larvae were transferred to a separate tank and offered Artemia sp. in addition to copepods and rotifers. On day 25, the lights were dimmed and sand was introduced to stimulate settlement. Juvenile cusk eels were raised for 72 days on Artemia sp.. They feed at night and hide in the sand during daylight hours.

Fourteen day old O. muraenolepis larvae have an angular jaw, a coiled gut and a very elongate body with a tapered tail. At this time, the 10.3 mm TL larvae have a full complement of rays in the caudal fin and appear to have completed flexion. 23 dph at 16 mm TL, the distinctive barbels (that develop from the pelvic fin buds) are visible. Near 32 dph at 22 mm TL, the larvae orient toward the bottom. They burry in the sand shortly thereafter. The three juvenile O. muraenolepis more than doubled in length over the next 30 days.

Blackedge cusk eel larvae have a relatively short larval phase (just over 30 days) and are easy to culture from egg to juvenile. The larvae have no special rearing requirements in the early stages. However, late stage larvae become nervous under direct lighting. Using sand and darkening the tank were key to inducing the larvae to settle.