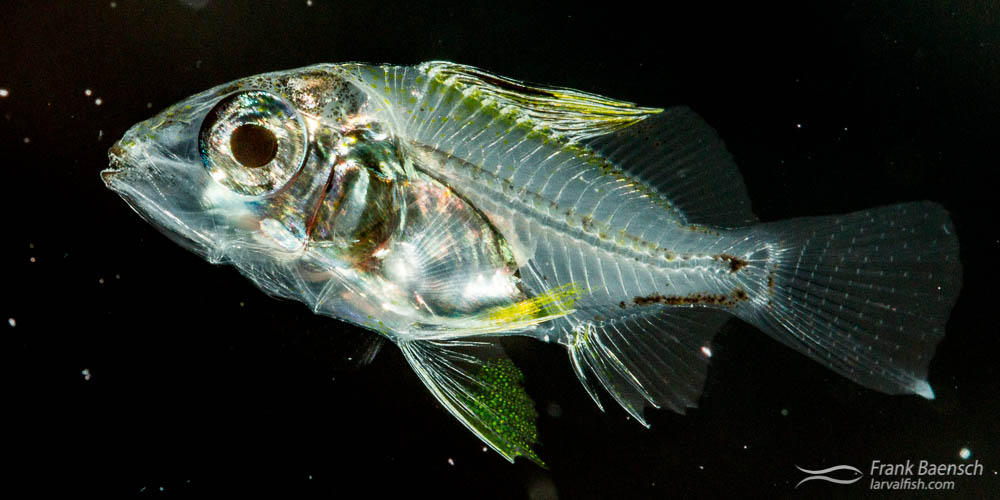 Snappers are a diverse group of medium to large (up to 3 feet), carnivorous fishes, comprising 21 genera and 125 species. They inhabit a variety of temperate to tropical habitats down to 1500 feet where they feed on crustaceans and fish. Snappers have excellent flesh quality and are fished heavily worldwide. Several snapper species are aquacultured but the larvae are difficult to rear.

The blacktail Snapper (Lutjanus fulvus) was raised from wild collected eggs in 2012, 2013 and 2014. This species is widespread throughout the Indo-Pacific where it inhabits estuaries and inshore coral reefs singly or in small groups. It grows up to 40 cm. Adults feed at night on fishes, shrimps, crabs, holothurians and cephalopods. Juveniles are sometimes found in shallow mangrove swamps and the lower parts of freshwater streams. Like many snappers, this species forms spawning aggregations. Spawning is estimated from April to October in the sup-tropics and throughout the year in the tropics. L. fulvus was introduced to Hawaii with the bluestripe snapper (L. kasmira) in the 1950s. It has not displaced native species there like L. kasmira has, perhaps because Hawaii’s coastal waters have fewer suitable habitats for juveniles.

L. fulvus produces pelagic eggs that are spherical, clear, 0.75 mm in diameter and contain a single oil globule. L. fulvus larvae measure about 1.8 mm TL at hatching. They begin to feed on copepod nauplii near 3 dph (3.1 mm TL); pass through flexion between 12 and 18 dph (approx. 5 mm TL) and begin to settle near 40 dph (15 mm TL). TheL. fulvus larval phase is between 55-60 days.

Features of the larvae are an initially elongated body that quickly deepens; an early-forming, elongate second dorsal spine and pelvic spines; and early-forming and visible teeth during the pre-flexion stage.

L. fulvus is the second most common snapper larvae reared for the project, the first being L. kasmira. The rearing and development of L. fulvus and L. kasmira is very similar.