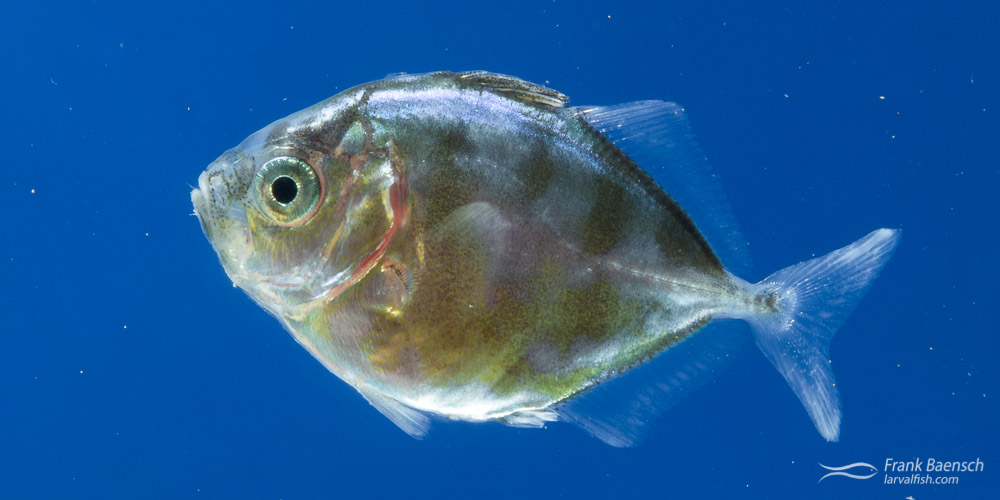 The bluefin trevally (‘Omilu’ in Hawaii) is a large, colorful jack species (Carangidae) found throughout the tropical and subtropical Indian and Pacific Ocean. Arguably the most beautiful of all trevallies, this jack is also one of the most common predators on coastal and oceanic reefs. Juveniles school and prefer shallow protected habitats. Adults are more solitary and can be found down to 600 feet. The largest specimens reach about 39”/100 cm, but most average 23-27”/60-70cm.

Fishermen love the bluefin trevally for its taste and fighting ability. Here in Hawaii, it makes up the majority of the carangid catch, even though larger fish regular cause ciguatera poisoning. As a result, it has been heavily overfished, to the extent that most bluefin trevally sold in Hawaii are imported from other Indo-Pacific nations. That said, juveniles and small adults are still common on Hawaii’s reefs.

C. melampygus larvae were cultured at my hatchery in the summer of 2018, 2019 and 2020 from eggs collected with a neuston net off Oahu’s south shore. Since C. melampygus  eggs are uncommon in my tows, the larvae were reared together with other fish species. The fish were separated by size and transferred to new tanks as they grew. All larval rearing took place in 13-gallon or 20-gallon black round tanks.

Larval C. melampygus were fed cultured Parvocalanus sp., from first feeding through transformation; and newly-hatched artemia, starting on day 20. Isochrysis sp. was added to the larval tank from first feeding through day 20 to create turbidity (calms the larvae) and to maintain nutritional quality of the live foods. The larvae began to associate with objects (such as airline tubing) halfway through postflexion (≈22 dph). Mortality was minimal up to flexion and not observed from postflexion onward.

Juvenile C. melampygus were grown out for several months in a 55-gallon barrel recirc system on various diets; mostly grated frozen seafood, flakes and pellets. Juveniles schooled with other cultured carangid species during grow-out.  No intraspecies or interspecies aggression was observed. The fish were released into the ocean at about 3″/7.6 cm. A few juveniles were donated to the Waikiki Aquarium.

C. melampygus embryos have a single oil globule and measure 0.75 mm in diameter. Yolk-sac larvae develop a cluster of pale yellow pigment in the midsection. The larvae start to feed 3 days after hatching (dph) at 3.2 mm total length (TL). The gut is initially straight and begins to coil on 6 dph at 4 mm TL. The larvae start flexion about 14 dph at 5 mm TL. The larval body deepens considerably during flexion. At this time, the gut becomes roundly triangular. A conspicuous gas bladder is located over the gut coil. The larval head and body is pale yellow. Dense melanophores cover the head region. The larvae complete flexion within 4 days.

Postflexion larvae develop a golden body color and an increasingly reflective light blue sheen on the dorsal side. This color pattern becomes more silver and barred as the larvae approach transformation. Transformation begins on 24 dph, when the larvae measure 15 mm TL. Postlfexion C. melampygus grow at about 0.5 mm/day.

C. melampygus grow fast, especially after they complete flexion. The larvae are easy to raise on copepods and artemia, with no discernible culture bottlenecks. C. melampygus juveniles are not aggressive and will eat most types of fish food. C. melampygus larvae and juveniles appear suitable for aquaculture.

The rapid decimation of the Hawaiian bluefin trevally population prompted the Oceanic Institute (OI) to explore its aquaculture potential in the late 1990’s. OI found that wild juvenile bluefin trevallies adapt well to captivity and reached sexual maturity at 12-15″/30-40 cm in length at about 2 years of age. Adult fish spawned naturally, primarily during the summer months. Spawning reportedly occurred at night (possibly to minimize predation on eggs). Females produced about 6 million eggs per season, spawning as much as 5 times each (Morikake et al., 2001).

OI raised bluefin trevally larvae as part of a study about changes in the digestive enzymes of the species. Fertilized eggs (obtained using a LHRH implant) were incubated in a 5,000L tank at a stocking density of 60 eggs/l. Larvae were fed rotifers and artemia through metamorphosis (30 dph). Digestive enzyme activity showed a shift from carbohydrate use to protein and lipid use as the larvae grew (Kim et al., 2001). 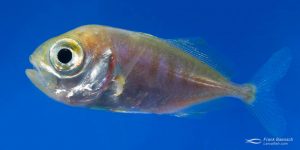 Blue trevally larvae (Carangoides ferdau) were raised from wild-spawned eggs at 77-79F on wild copepods. The larval duration was 40 ... 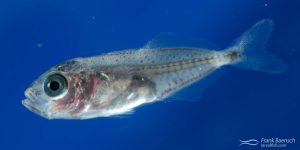 Mackerel scad (Decapterus macarellus) larvae were raised from wild-spawned eggs at 77-79F on wild copepods and artemia. The larval duration was ...