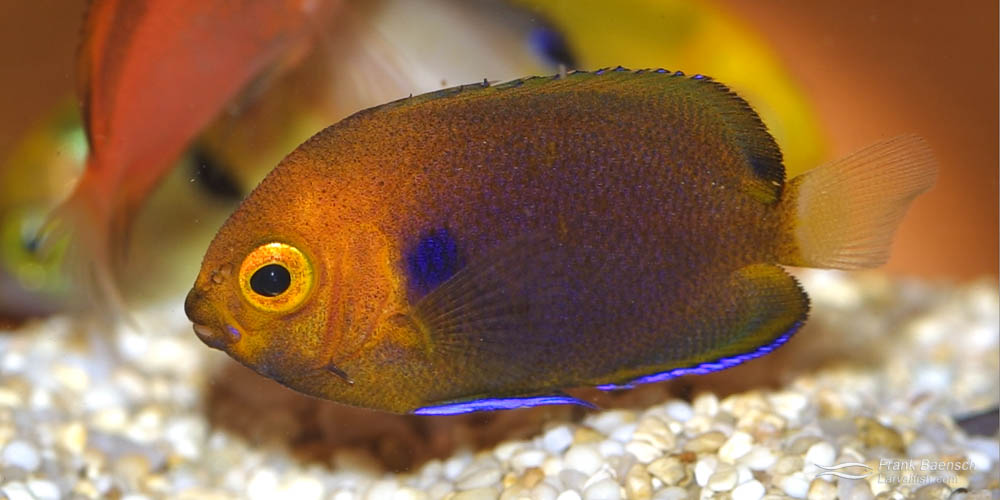 The diminutive and brilliantly colored pygmy angels (genus Centropyge) are the most popular and heavily traded angelfishes in the aquarium hobby. The genus is the largest within the Pomacanthid family, comprising a total of 28 described species. Most of these are hardy in captivity and, unlike the larger marine angelfishes, can be kept in small aquariums. Centropyge are difficult fish to aquaculture and most of my research prior to the Larval Fish Project has focussed on developing rearing methods for this group. This work has resulted in the captive breeding of twelve species and 2 hybrids, most of which were made available to the hobbyist. Yet, the complicated rearing phase of the larvae still impedes pygmy angelfish from being mass cultured and, to date, the large demand is met solely by wild collection.

The Fisher’s Angel (Centropyge fisheri) was cultured at the Reef Culture Technologies hatchery on a number of occasions. This small species (up to 3”) is endemic to the Hawaiian Islands. It is usually found on rubble bottoms on outer reef slopes at depths of 50-150 feet.

The eggs were obtained from hatchery conditioned adults from 2001 – 2005 and from wild egg collections in 2014. The eggs are spherical, colorless, contain a single oil globule and measure about 0.65 mm in diameter. The larvae measure 1.2 mm TL at hatching, 2.6 mm TL at first feeding, 4.6 mm at flexion and about 11 mm at settlement. Features of the larvae include conspicuous body spinules and head spination. Preflexion larvae are moderate bodied with reddish pigmentation. Postflexion larvae develop a deeper and more laterally compressed, silver colored body with brown pigmentation on the dorsal area. They start to settle near 40 dph (days post hatch) and complete metamorphosis in about 10-15 days, resulting in larval period of about 55 days.

C. fisheri larvae require copepods throughout the rearing phase and are moderately difficult to raise. However, the adults are hardy and easy to spawn in captivity and the larvae settle faster with less complications than many other Centropyge species cultured to date. These attributes make C. fisheri is an excellent model species for the experimental rearing of more difficult to rear marine fishes. The cultured juveniles spawned after just 230 days.