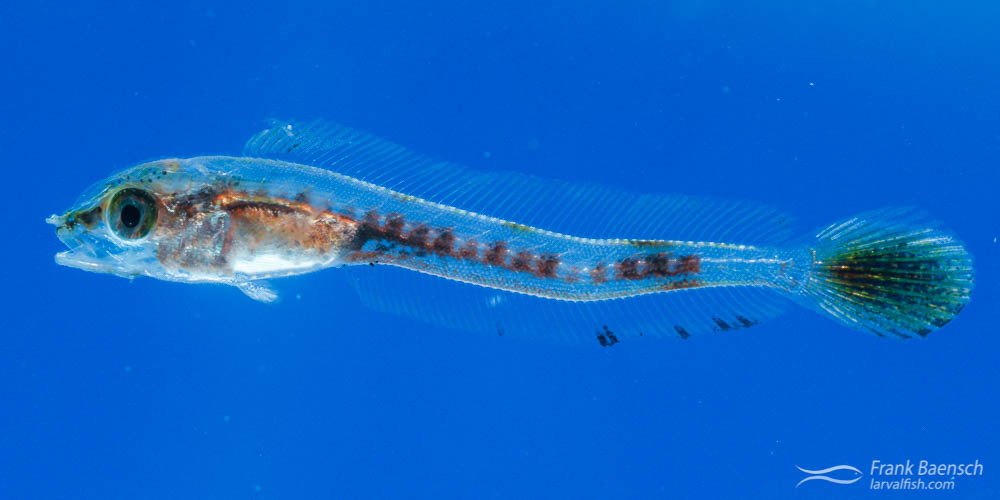 Tilefishes (family Malacanthidae) are small to medium sized (up to 80 cm/31”), bottom-oriented fishes with an elongated body. The family is relatively small, comprising 5 genera and 39 species. Tilefishes live, often deeper than 200 feet; in burrows, piles of rock or under coral reef overhangs, feeding on benthic invertebrates. Some larger tilefish species are commercially fished for food and smaller, colorful tilefishes are kept in aquariums.

The Flagtail Tilefish (Malacanthus brevirostris) is found throughout the tropical and subtropical Indo-Pacific. It is typically seen in pairs inhabiting barren, open areas near reefs from 15-120 feet (5-40 m), living in self-made burrows often located under ledges. The post-larvae of M. brevirostris are pelagic and grow to at least 70 mm in length (Leis et al. 2004) before they settle on substrate, which explains the widespread distribution of this species.

M. brevirostris larvae were reared for this project in 2012-2015 from small numbers (usually less than 10) of wild collected eggs. This species was only found in the neuston net tows from January through March, indicating that it is a winter to spring spawner here in Hawaii. The eggs are pelagic, measure 0.85 mm in diameter and contain single oil globule. Both the oil globule and embryo are heavily pigmented.

Newly hatched M. brevirostris larvae are 2.8 mm TL (total length). They start to feed on copepod nauplii two dph (days posthatch) at 3.1 mm TL. Within 24 hours after first feeding brown pigment develops on the body. The pigment gradually takes on an unusual blue metallic sheen over the next few days. This makes it easy to distinguish the larvae from other species in the rearing tank.

M. brevirostris larvae undergo flexion between 13 dph (5.0 mm TL) and 18 dph (5.7 mm TL). Yellow and brown pigment develops on the tail while the body looses its metallic sheen during this transition. Postflexion larvae acquire a long, slender, increasingly pigmented body and change their swimming orientation from a horizontal to almost vertically position in the rearing tank. Post-larvae loose the brown pigment on the body and develop blue color on the fins when they reach about 25 mm+ TL. M. brevirostris‘s specializations to pelagic life include extensive head spination and body spinules.

The M. brevirostris pelagic larval stage is very long and likely exceeds far beyond 100 days in culture. Rearing the larvae presented few problems through the postflexion stage when copepods were used as a live feed. However, post-larvae became noticeably nervous in small 15-20 gallon rearing tanks as they approached settlement. The largest individual was reared to 41 mm TL for 85 days when it was found dead outside of the rearing tank. At this stage it was still close to 30 mm smaller than what is believed to be the natural settlement size of this species on the reef. Starting with more larvae and using larger grow out tanks would help bring this species entirely through its incredibly long pelagic phase.