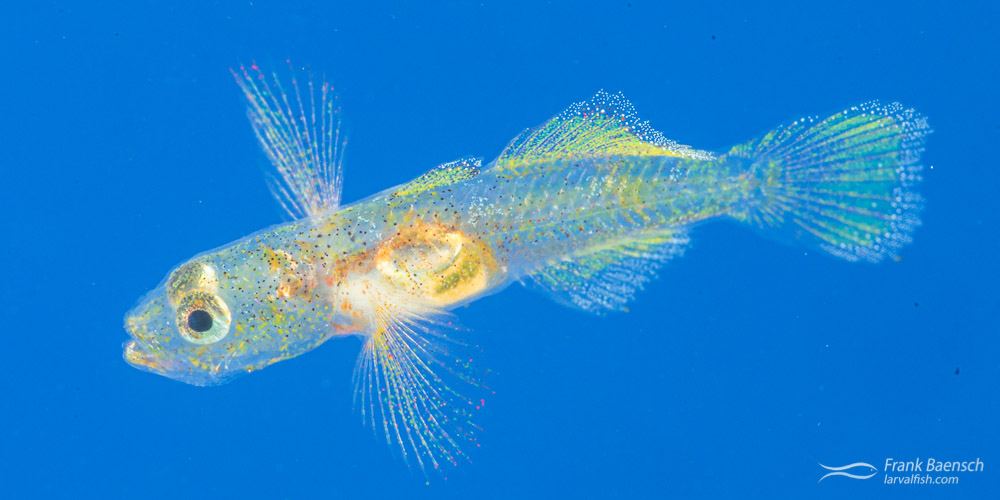 The Golden goby is native to the central Pacific Ocean, where it occurs in Micronesia, Johnston Atoll and the Hawaiian Islands. It is a secretive species, often found in caves and deep crevices on seaward reefs from 20 to 200 feet. The bright yellow-green body and large pectoral fins arguably make it one of Hawaii’s most attractive gobies. The Golden goby is small (up to 2.5”/6.6 cm), non-aggressive, easy to care for and ideally suited for nano reef tanks. Like all 35 Priolepis species, it is a protogynous hermaphrodite.

Two P. aureoviridis adults were brought into the hatchery in the fall 2019 and conditioned in a 20-gallon tank on live artemia and a mixed seafood diet. The fish resided in separate areas in the tank for several months before pairing inside a 1/2” gray PVC pipe. A short time later, the pair spawned on the ceiling of the pipe. The male guarded and ventilated the nest. Over the next 9 months, the pair spawned every 6-7 days. Clutch size varied from 500-900 eggs.

P. aureoviridis eggs hatch 5 days after spawning, when they take on a silvery appearance. At this time, the pipe containing the eggs was transferred to the rearing tank. Hatching was induced by exposing the eggs to air and agitating them in the rearing water. The larvae were raised through settlement in a static 13 gallon brt (black round tank) on progressively larger size-screened copepods (primarily Parvocalanus sp.). Daily bottom siphoning and water changes were initiated from day 12.  Tank flushes (from a recirculation system) started on day 25. Artemia was fed starting on day 38. Background algae was used throughout the larval rearing phase. Postflexion larvae grow slowly and became increasingly fragile with age, esp. close to settlement. The larvae prefer low light and low turbulence. Larval survival was high through flexion, but steady mortality leading up to settlement resulted in low overall survival.

P. aureoviridis eggs are ovoid, adhesive and measure 0.9×0.5 mm. The larvae hatch at 1.9 mm TL with large pigmented eyes, a partially developed jaw and a pigmented body. They begin to feed 24 hours later (2.1 mm TL). The yolk-sac is fully absorbed on 2 dph. Air bladder inflation occurs on 4 dph at 2.1 mm TL. Like most goby larvae, they have a large prominent air bladder. They undergo flexion from 18-22 dph (3.7-4.5 mm TL). P. aureoviridis larvae have bright red-yellow-orange pigment on the body. Postflexion larvae develop large colorful fins.  They  start to settle on 65 dph at 10 mm TL.

P. aureoviridis is an attractive aquarium fish that is presently only available through wild collection – albeit likely with negative impacts given its secretive nature. Unfortunately, this is not your typical easy-to-raise goby species. The late-stage larvae are fragile and slow growing and the larval stage is long, relative to other cultured gobies. These findings suggest that P. aureoviridis is a poor candidate for aquaculture, esp. given its low market price (about $25). That said, late-stage larval rearing issues, such as those seen with P. aureoviridis, can often be resolved in larger, deeper rearing tanks. With stunning, higher value members, like P. nocturna, as potential candidates, Priolepis aquaculture deserves more investigation.

ORA raised the Girdled goby (Priolepis cincta) in 2014. ORA cited costly feeding challenges and a long larval duration (60 days) as P. cincta culture bottlenecks, stating that the species was unlikely to be commercially available in the near future. The rearing challenges of P. cincta and P. aureoviridis appear similar.

ORA: Experimenting with Priolepis unlocks the mysteries of the genus 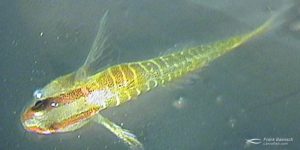 Green-banded goby larvae (Tigrigobius multifasciatus) were raised from captive-spawned eggs at 77-79F on rotifers and artemia. The larval duration was ...