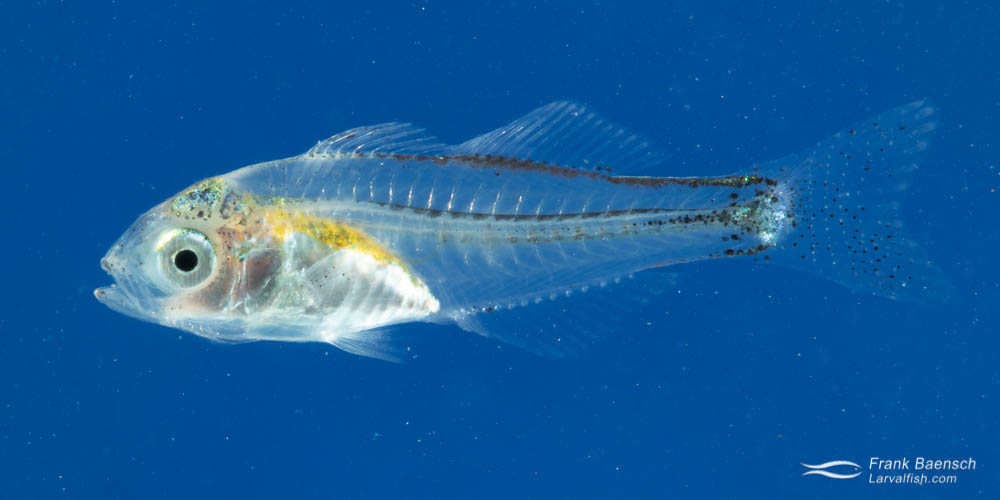 The endemic Hawaiian flagtail (Kuhlia xenura) is one of two flagtail species known to occur in Hawaii.  Until 2001, this species was misidentified as the reticulated flagtail (Kuhlia sandvicensis), which is locally less common but also occurs throughout the Central Pacific.  In Hawaii, adult flagtails or aholes form dense schools inshore on exposed reefs, often in areas of high surge. Juvenile flagtails or aholeholes grow up in freshwater streams and in the coastal shallows, including tidepools and brackish habitats. Adult flagtails feed on plankton at night (Randall 2007). Traditionally, flagtails were used in Hawaiian ceremonies to chase away evil spirits and for love magic. Nowadays, they are fished commercially and recreationally and are often used as bait. Flagtails  are popular in public aquariums for their visual contrast and schooling behavior.

Juvenile Hawaiian flagtails (Kuhlia xenura) were cultured from eggs collected in Oahu’s coastal waters in September 2018. The larvae were raised together with multiple other species; including butterflyfishes, tilefishes, dragonets, snappers, surgeonfishes, soles and chubs. This mix of larvae was raised on copepods (Parvocalanus sp.), rotifers and artemia in a 20 gallon brt (black round tub). Isochrysis algae was added to the tank from first feeding through day 30 to provide turbidity and to enhance the nutritional quality of the live foods. Water quality was maintained by bottom siphoning and periodic tank flushes. K. xenura  larvae grow quickly but become very active and light sensitive in the late stages.

K. xenura larvae were first identified in the mixed-species larval run 12 days after hatching. Since early K. xenura development was not documented, egg and larval descriptions of Kuhlia mugil will be used a reference.

K. mugil eggs are pelagic, spherical, measure about 700 um in diameter, and have a slight yellow hue. The newly hatched larvae have nonfunctional eyes and mouth, a short gut and yellow pigment above the gut and midsection. The yellow pigment gradually disappears during the yolk-sac stage while metallic blue pigment develops over the gut and eyes. K. mugil larvae measure 2.8 mm NL (notochord length) on 3 dph (days-post-hatch)(Connell et al. 2012).

Twelve-day-old K. xenura larvae (6.2 mm TL) have an elongate body with a short triangular gut and a distinctive cluster of melanophores on the tail. At this stage the larvae are already undergoing notochord flexion.  By 25 dph, the larvae (12 mm TL) have a moderately deep body with a band of yellow pigment above the abdomen and clusters of metallic blue pigment on the head. By 35 dph, the fish (22 mm TL), have juvenile color and exhibit juvenile behavior.

K. xenura larvae were fairly easy to raise on copepods. Their 35-day pelagic larval duration (PLD) in culture was similar to that of wild collected K. xenura (32 days)(Iglesias, 2012) and only slightly slightly longer than K. rupestrism, raised by Michael Hutchison et al. in 2016. But the larval durations of Kuhlia species appear to vary. For example, the PLD of wild K. sandvicensis was 60 days (Randall 2001) and that of cultured K. mugil larvae was almost 90 days (Gardner 2013). The difference in larval duration between these Kuhlia species is astounding and highlights the importance of choosing the right fish species to commercially culture.  Cultured flagtails would make an environmentally-sound display fish for public aquariums.

Todd Gardner first raised flagtails (Kuhlia mugil) at the New England Aquarium in 2013 from eggs collected in the Aquarium’s 20,000-gallon coral reef tank. Todd used cultured copepods (Parvocalanus sp., Acartia sp., and Pseudodiaptomus sp.) and rotifers throughout the larval period and Cyclo-eeze and Artemia during juvenile grow-out. The larval period of Kuhlia mugil in culture was close to 3 months.

Gardner Todd. 2013. Another mystery larva identified and another industry first at the Long Island Aquarium.

Iglesias, Ilysa Stefanki. 2012. Are rocky intertidal pools a nursery habitat for juvenile reef fish? An investigation of the spatial and temporal abundance patterns of juvenile fishes utilizing basalt tidepools on the island of Oahu and a comparative growth analysis of the endemic Kuhlia xenura. University of Hawaii at Manoa.