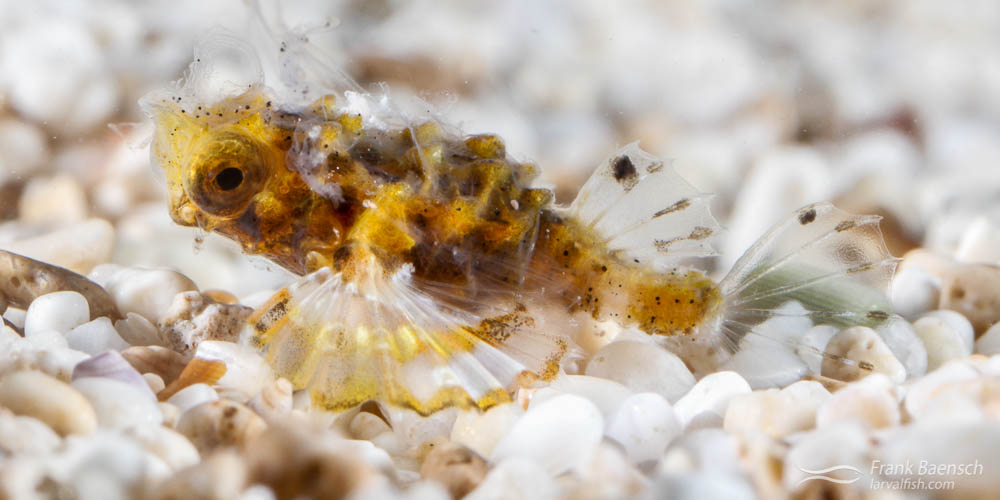 The sea moths (Pegasidae) are small, unusual, benthic fishes comprising two genera and five species. They are found in the tropical and sub-tropical Indo-Pacific inhabiting grass beds, rubble areas or mud/sand flats at depths of 10-400 feet. The appearance of sea moths is quite extraordinary. They have a flattened body encased in thick, fused bony plates; a long curved snout, composed of fused nasal bones; toothless jaws; modified pelvic fins used for “walking” on the sea bottom; and fan-like pectoral fins. The body armor protects against predators. The mouth and long rostrum are used to find and capture small benthic invertebrates. They are camouflaged and can adjust their color based on their surroundings. They also have the unique ability to periodically molt their bony external armor, perhaps as often as every five days, in an effort to rid themselves of parasites. Sea moths face several threats. They are caught as by catch during bottom trawls, used in traditional Chinese medicines, and collected for the aquarium hobby. Sea moths have not been aquacultured.

The Hawaiian seamoth (Eurypegasus papilio) is the only seamoth species that occurs in the Hawaiian Islands. It is small, endemic and rarely encountered so little is known about its biology. Adults are usually accidentally collected in depths of 250-1000 feet with bottom trawls. Juveniles are sometimes collected at the surface at night using bright lights or tow nets. This species has a reported adult length of just 3” (7.6 cm).

The Hawaiian seamoth was cultured from a single pelagic egg collected off Oahu’s south shore in the winter of 2014. The egg was pelagic, transparent, and spherical and measured approximately 1 mm in diameter. The newly hatched larva was largely undeveloped, had a large yolk-sac, and measured 2.2 mm TL. The larva began feeding 3 dph at 3 mm TL and underwent flexion near 10 dph at 3.7 mm TL. Shortly thereafter, the first appearance of body armor was observed, at which time the fish became more bottom-oriented. By 20 dph, at 4.8 mm TL, the now fully settled juvenile had a dark gray/brown colored, completely armored body. At this time it was transferred to a juvenile grow-out tank together with several dragonet species. Grow-out foods included newly hatched artemia and live adult cultured copepods. The drab colored body and pectoral “wings” gradually took on a beautiful yellow, orange and white pattern over the next 15-20 days. The rostrum/snout began to develop near 38 dph at 10 mm TL. At this time the first molting was observed. The fish was grown out for 9 months to a size of 65 mm TL (adult size). It was released on a rubble sand bed in deeper water and, within minutes, began hunting for food along the bottom.

The fascinating early life history of the Hawaiian seamoth was exciting to document. Every effort was made to provide this fish with the best culture conditions (esp. live foods & a peaceful tank environment) to ensure survival through its 21-day larval period and just over 8 month juvenile grow-out period. That said, raising an adult from a single egg would be unlikely if major biological constraints existed. This is the first documented rearing of a sea moth species.