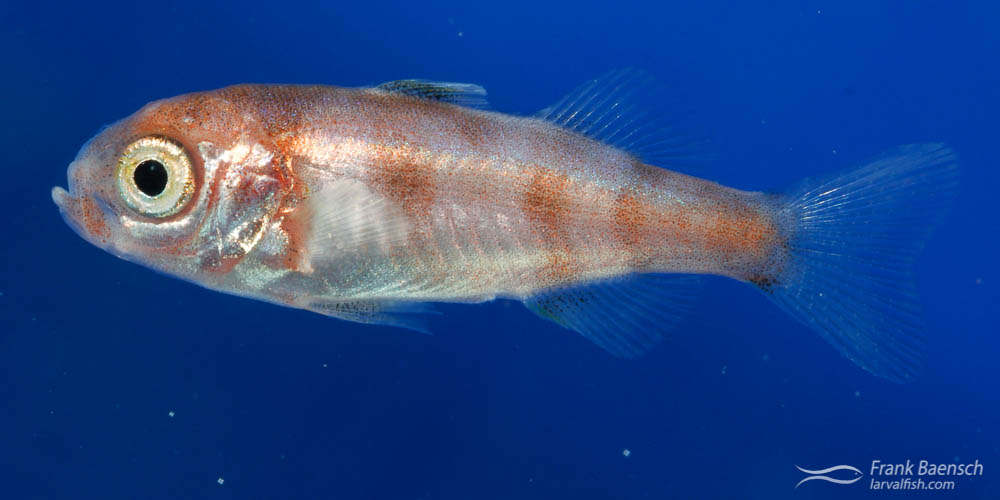 Rovers (Emmelichthyidae) are slender, reddish, small to medium sized, planktivorous, schooling fishes with protrusible, toothless or nearly toothless jaws, long dorsal fins, and forked tail fins with lobes. The family comprises 3 genera and 16 species. Juveniles occur near the surface, often with other schooling fishes, and adults live near the ocean bottom, at depths of 300-1200 feet. Rovers are commercially fished for human consumption, bait and for fish meal but have not been aquacultured.

The Karnella’s Rover (Emmelichthys karnellai) is one of three rover species found in Hawaiian waters at depths of 400-900 feet (120-270 m). This species also has been reported from Guam and Easter Island. The largest individuals reach about 12 inches (30 cm).

A single E. karnellai juvenile was raised from a batch of eggs collected in coastal waters off Oahu, Hawaii in March, 2013. Rover larvae appear similar to the larvae of some damselfish (Pomacentrid) and jack (Carangid) species in the early larval stages (pre-flexion, flexion) but are less pigmented. This individual was first identified seven days after hatching by it’s relatively large size, calm behavior and unique morphology relative to the other larvae in the rearing tank. It was feeding on copepod nauplii at the surface.

E. karnellai appears easy to culture with a similar growth rate and morphology (but different pigmentation) to the Emmelichthys sp. previously raised for this project in May 2012.