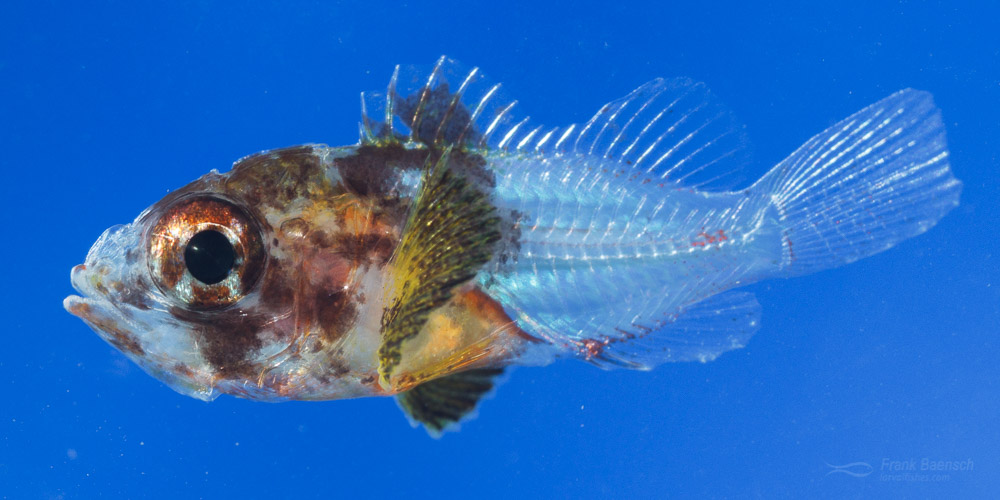 Scorpionfishes (family Scorpaenidae) are cryptic, carnivorous, small to medium-sized, bottom fishes, comprising 45 genera and over 380 species. They are widespread in tropical and temperate seas but mostly found in the Indo-Pacific. Named for their poisonous fin spines, the family includes some of the world’s most venomous species. Many scorpionfish species are commercially important as food fishes due their excellent meat quality. Members of this family have not been cultured largely because of their complicated larval phase.

The Kellogg’s scorpionfish (Scorpaenodes kelloggi) is a small cryptic scorpionfish species (2”/5 cm) found in the Indo-Pacific from East Africa to Australia to Hawai’i.  It lives in coralline and rubble areas from near shore to the outer reef slope down to 100 feet. It hides during the day.

S. kelloggi juveniles were reared from eggs collected in Hawaiian coastal waters, in 2013 and in 2021. Like other scorpionfishes, this species produces eggs that are embedded in a large, pelagic, sac-like gelatinous matrix. S. kelloggi’s egg cluster measures roughly 6 mm in diameter and contains about 75-100 small, oval (0.6×0.7 mm) eggs that lack an oil globule. The newly hatched larvae measure a mere 1.4 mm TL at hatching. They begin to feed on small live foods (<60 um) two days after hatching at 2.1 mm TL.

S. kelloggi larvae are stunning, developing large, fan-shaped, colorful pectoral fins. The black-dotted, yellow-green-brown fins begin to form at 4 dph (2.5 mm TL) and are largest as the larvae pass through flexion near 20 dph (5 mm TL). Flexion is complete near 26 dph (9.0 mm TL). The postflexion stage can be significantly shortened by providing the larvae with improved nutrition and water quality. In 2013, the first benthic, fully colored juveniles were observed near 90 dph (50.1 mm TL). In 2021,  juveniles were obtained in 60 days using the latest culture protocols. The large, early forming pectoral fins; extensive head spination; and the presence of a swim bladder (which is lost during settlement) are the main specializations to pelagic life of the larvae.

S. kelloggi larvae are difficult to culture largely because of their small mouth at first feeding; large, delicate pectoral fins; sensitivity to light and organics in in the later stages; and complex settlement requirements. Feeding algae-fortified ciliates and wild copepods, maintaining an exceptionally clean tank environment and reducing light levels during late larval stages were key in raising the larvae.