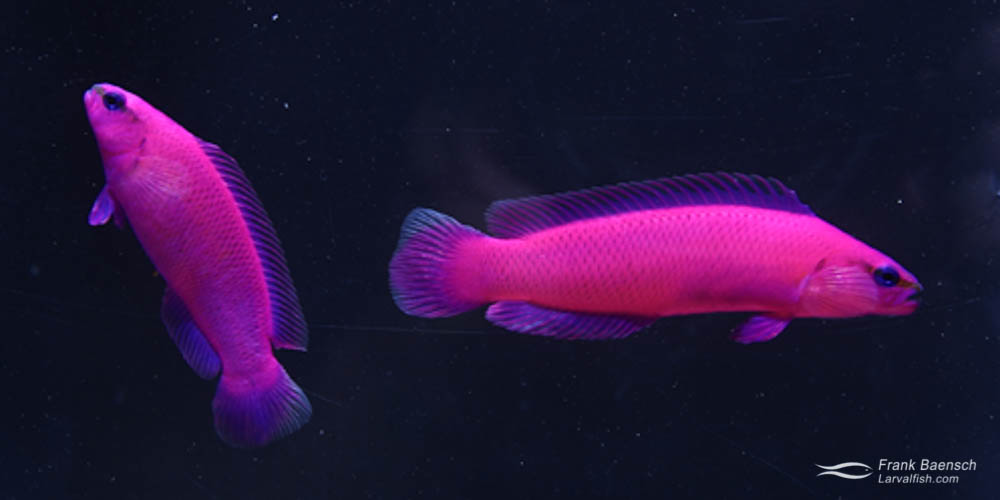 The dottyback (Pseudochromidae) family comprises over 50 species many of which are well known for their intense coloration and bold behavior. The group is closely related to the groupers (Serranidae), however clearly differs in its mode of reproduction and morphology. While groupers grow to significant size and are pelagic spawners, releasing their eggs into the water column, all dottybacks lay demersal eggs masses, with most species reaching little more than 3 inches in length. These egg masses are held together by filamentous strands and are laid in rock crevices or small caves where the male protects and cares for them.

Many dottyback species make popular aquarium additions due to their captive hardiness, small size and brilliant colors. Aggression between individuals of similar or the same species may become a problem. The best way to sex most dottybacks is by their caudal fin, which, in males, is elongated along the upper and lower edge. A number of dottyback species, including Pseudochromis fridmani, are farm raised regularly around the world.

P. fridmani only occurs in the Red Sea, where it mostly lives singly near crevices at depths anywhere from 3 to 120 feet. Sometimes it can be found in larger numbers at moderate depths near vertical walls or overhangs. As a plankton feeder, it prefers adult brine or mysid shrimp but can also be persuaded to take flakes, small pellets and gel diet.

My P. fridmani pairs were kept in 20-gallon tanks and spawned in PVC pipes under summer temperatures and photoperiod. Spawning usually takes place in the morning after a long ritual during which the male entices the female to enter his den. On the evening of the 4th day, about 1 hour after the lights turn off, the egg ball hatches. Newly hatched P. fridmani larvae start feeding on s-type rotifers within 24 hours. They are moderately difficult to raise on enriched rotifers and artemia in tetraselmis greenwater. Once the appropriate technique is developed excellent survival can be obtained. P. fridmani larvae start metamorphosis near day 26.