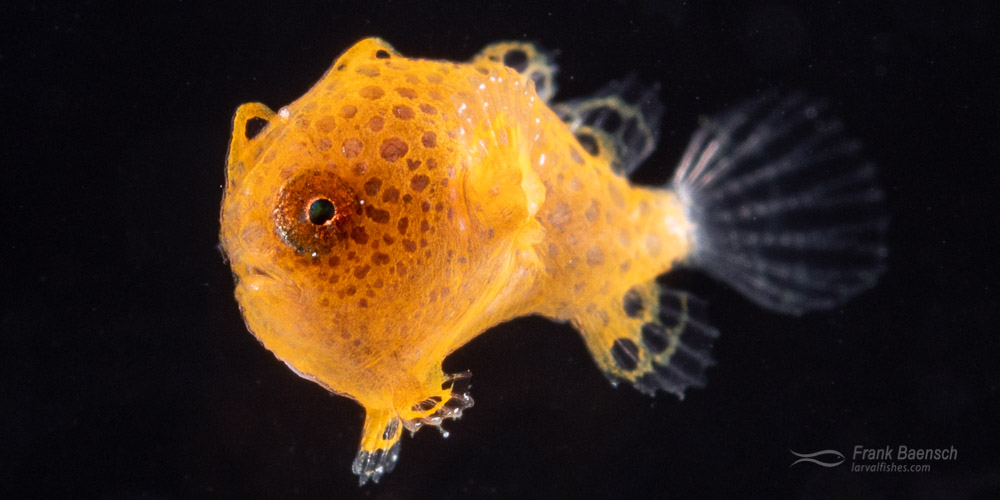 Frogfishes (family: Antennariidae) are small, slow moving ambush predators with a short, stocky, well-camouflaged body. Frogfish can change their color in a few weeks to match their surroundings. These masters of disguise use a lure-like esca attached to a fishing rod (illicium) to attract prey. They then strike in milliseconds, sucking in whole crustaceans and fish up to twice their size. Frogfishes live in a variety of habitats; mostly shallow, tropical, and subtropical reefs worldwide. Their unusual body and quirky and comical nature make them a hit among underwater photographers. Frogfishes are also hardy and adapt well to aquariums but will eat smaller-sized tank mates. They are not aquacultured.

The painted frogfish or spotted frogfish (Antennarius pictus) is found throughout the tropical Pacific and Indian Oceans and in the Red Sea, where it inhabits lagoons and shallow sheltered coral reefs on or near colorful sponges. It purportedly grows to 12” but is usually encountered no larger than 8”. Juveniles are often black or bright orange, mimicking small sponges or nudibranchs.

A. pictus is closely related to A. commerson, A. maculatus, A. multiocellatus and A. pardalis, which collectively make up the A. pictus group. A. pictus members have similar form but great chromatic variety.  A. pictus can be identified by its long, broad lure; its blotches or ’empty spots’ covering most of its body and the three light-edged spots on the caudal fin.

A. pictus juveniles were raised from an egg raft found floating 5 miles off Oahu in January 2022. The egg raft was hatched under flow in a 5-gallon bucket. The larvae were raised through flexion in a 70L round tank in dense microalgae on ciliates, parvocalanus nauplii, size-sorted wild copepods and enriched rotifers. Postflexion larvae were raised in a 50L round tank under dim light on newly-hatched and enriched artemia. Starting on day 7, the tank was periodically flushed with UV-filtered water from the recirculating system to remove food and maintain water quality.

A. pictus’s egg raft is a 300x40mm ribbon-like sheath curled in on each end. The eggs are held in a honeycomb matrix within the raft. The egg is slightly oval (0.75×0.9 mm) and lacks an oil globule. The hatching larva is primitive with a large yolksac and measures 1.5 mm TL (total length). The larvae start to feed at 5 dph (2.3 mm TL). First feeding larvae have a moderate body with large eyes, a small mouth, and large pectoral fins with white fringes. The larvae quickly become bulbous as the body is sur­rounded by an inflated dermal membrane. Black pigment spreads on the abdomen, over the future location of the reflective swim bladder. Growth is slow. The larvae undergo flexion between 29 and 38 dph at 3.4-3.8 mm TL, about 2-3 weeks later than most larval fishes. A swim bladder first appears during flexion. Bladder inflation is critical, as the larvae do not survive without it.

Postflexion A. pictus are short and stocky and have a large head and mouth. Black pigment covers the gills and gas bladder. Pelvic fins are first visible near 43 dph. Growth remains slow throughout the postflexion period. A tiny esca (fishing lure) becomes visible on the head just before settlement.

The larvae start to settle near 80 dph at a mere 6.8 mm TL. The 2-3 day larva to juvenile transition is marked by significant developmental changes. Obvious visible changes include large modified pelvic fins for “walking”; skin that is covered with multiple small eye spots/ocelli (which look like sponge holes); complete urostyle ossification in the tail; formation of the illicium (fishing rod) and a red to orange body color, that varies from individual to individual (intended to match the settlement habitat).

A. pictus larvae are difficult to raise through flexion due to their small mouth, poor hunting ability, long preflexion period, and low incidence of air bladder inflation. The postflexion stage is also long, but the larvae are robust and easy to handle and require little culture effort once weaned on artemia. The small size at settlement was a welcome surprise and helped make this species much easier to raise in a small tank. Juveniles feed on large live foods and grow much faster than the larvae. Fortunately, they are not aggressive or cannibalistic (like Histrio spp.), and can be grown out together. In fact, they often congregate in groups of two or three.

Frogfishes are extremely fecund and will spawn in captivity. Egg rafts contain tens of thousands of eggs, which could translate into high juvenile numbers once the culture bottlenecks of the early stages are resolved. Given adequate demand, it does appear that A. pictus, and perhaps other Antennarius spp., are suitable for aquaculture. 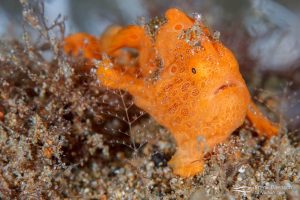