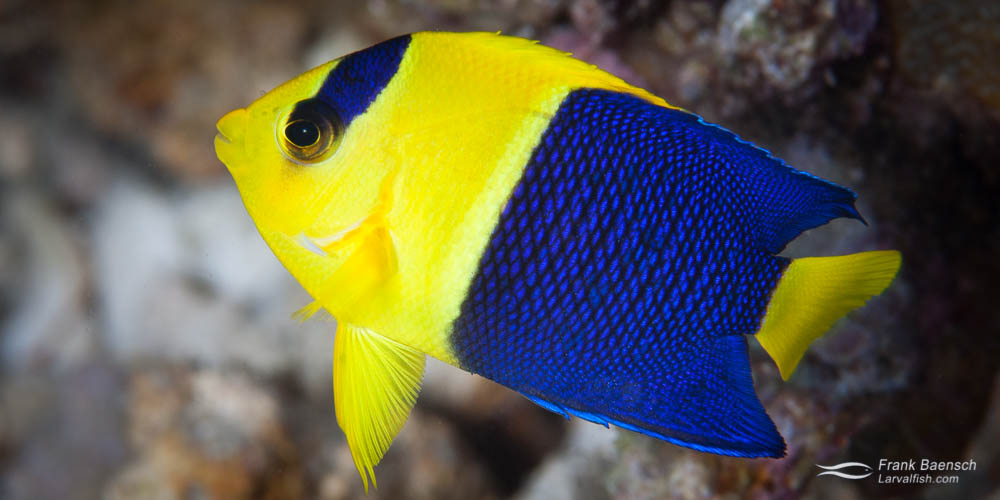 Pygmy angelfishes inhabit the tropical and subtropical waters of the Pacific, Indian and Atlantic Ocean, with the majority (approximately 16) occurring in the central Pacific region between Indonesia and Hawaii. No occurrences from eastern Pacific and western Atlantic reefs have ever been documented. Many species have a wide distribution and some are endemic to one specific region. For example, the Coral Beauty (C. bispinosus), Flame (C. loriculus), Bicolor (C. bicolor) and Lemonpeel Angelfish (C. flavissimus) can be found across most of the central Pacific. On the other hand, the Cherubfish (C. argi) and Flameback Angelfish (C. acanthops) occur only in the Caribbean; the Resplendend Angelfish (C. resplendens) is known only from the Ascension islands; and the Potter’s Angelfish (C. potteri) is restricted to Hawaii.

Pygmy angelfishes usually inhabit sheltered areas such as coral crevices, boulders or caves, though, depending on availability and predation-risk, more open spaces, like coral rubble flats, may also be occupied. Most species occur at depths between 5 and 200 feet. Being secretive by nature, they should be provided with ample hiding places in the community aquarium, especially when together with aggressive fishes.

The genus also contains several deep reef dwellers, inhabiting a region that has come to be known as the coral reef “twilight zone”. Spanning a depth roughly between 200 and 500 feet, the ‘twilight zone” represents the transition from the complex coral reef habitat to one where photosynthesis ceases to exist. Vastly unexplored, this region is a haven for new aquarium species. Thanks to advances in diving technology this region can now be explored. Deepwater pygmy angelfish discoveries include the Nahacky’s Pygmy Angelfish (C. nahackyi) (Kosaki 1989), the Blue Mauritius Angelfish (C. debelius) (Pyle 1990), and Narcosis Angelfish (C. narcosis) (Pyle & Randall 1992), Abe’s Angelfish (Centropyge abei) (Allen, Young & Colin 2006) and the infamous Peppermint Angelfish (Paracentropyge boylei) (Pyle & Randall, 1992). Deep reef Centropyge are fragile and expensive and, for obvious reasons, very rare to nonexistent in the aquarium trade.

As the popular name for these fish suggests, Centropyge and Paracentropyge are much smaller than their larger cousins in the genus Pomacanthus. The average length within the genus is only about 3.5 inches, with the smallest individuals merely reaching 2.5 inches (C. argi , C. acanthops , C. aurantia, C. colini , C. fisheri and C. aurantonota) and largest growing up to 7 inches (C. bicolor , C. tibicen and C. interrupta). All members have a highly laterally compressed body with an oval profile, continuous spiny dorsal fins, ctenoid scales and, like all Pomacanthids, a well-developed preopercular spine.

Most pygmy angelfish have a non-specialized diet, primarily feeding on algae, detritus and interstitial fauna. Some species also regularly feed on sessile invertebrates. The Japanese Pygmy Angelfish, C. interrupta, prefers a strange stable food. This species feeds directly on the fecal material of other reef fishes (Moyer and Nakazono, 1978).  C. colini , P. multifasciata and P. boylei  are believed to feed primarily on sponges and tunicates in the wild and have proven difficult to acclimate in captivity.

Generally Centropyge form loose groups or pairs and feed frequently within a territory. The risk of predation forces them to remain close to shelter and is maybe why some species associate with feeding schools of similar sized reef fishes. For example, C. ferrugata in Okinawa feeds with other fishes in areas where about half of the adult population disappears every year, presumably due to predation (Michael 1996).

A long-term field study on the bicolor angel (C. bicolor) showed that there is tremendous variation between the longevity of individuals inhabiting different locations. Individuals lived from 2 to 14 years and yearly population mortalities were as high as to 93.5 percent (Aldenhoven, 1986). Since very little site migration was observed, predation probably had a substantial affect on the longevity of C. bicolor and likely affects the survival of most Centropyge species.

The predominant social organization of most small, site-attached reef fishes, like the Centropyge, is the male-dominated harem. Harems usually consist of one large male, and one to four smaller mature females and up to nine immature females, each falling within a specific pecking order. For many species, harem structure may grade into pairing when less habitat is available. It has been suggested that harem-size may be related to the availability of spawning sites, which, in the case of Centropyge, are any elevated coral or rock formations.

In nature, every evening during the twilight hours, males undergo a lengthy and intense mating ritual with each mature female in their harem. Females station themselves near a coral outcrop or similar prominence in the territory, where they remain for the duration of the spawning period. Males repeatedly survey the territory, “rushing and circling” each female several times at their station. These two behavioral patterns have been observed throughout the day and are a means by which the male asserts his dominance over the harem. After several visits, the female usually becomes receptive to the male’s romanticism and will rise with him, a stage referred to as mutual soaring. As the pair soar, the male quickly orients himself in a 45° head up position, below the female, placing his mouth just upward of the female’s genital orifice. This is the characteristic spawning posture and is referred to as “nuzzling”. Once the final position is attained, the pair will rise about 10 to 50 cm in spawning configuration from 2 to 18 seconds, intensely quivering with fins spread. The height of ascent during the spawning posture increases with species size, a phenomenon that may arise from increased predation pressure on smaller species. Rapidly fluttering his pectoral fins, the male thrusts his snout against the female abdomen and spawning is commenced. He then executes a split second body reversal, orienting his orifice against that of the females. Both eggs and sperm are released simultaneously and fertilization occurs. The presence of an oil globule causes the eggs to rise to the plankton rich surface waters. Once gamete discharge has taken place the male, followed closely by the female, darts toward the bottom. The female hides at her station. The male continues courtship until all females have spawned and then retires upon darkness.

All Centropyge species histologically examined to date are protogynous hermaphrodites, born as females and capable of transforming into males. Since size differences between sexes and a haremic social structure are suggestive of protogyny, it’s likely that such a condition is distinctive of the entire genus. Sex change is a socially controlled phenomenon and is inhibited by the presence of the dominant male. Commonly, when this male is removed, the highest-ranking female will engage in masculine behavior within 7 days and become a fully functional male within about 20 days.