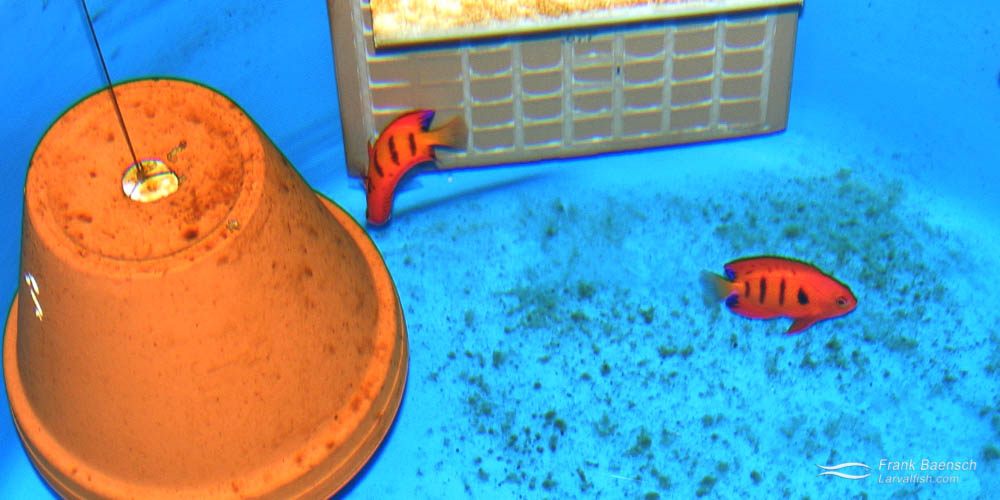 A reef aquarium makes an ideal environment for pygmy angels, being replete with hiding places and natural foods. However, they may not always be safe for the sessile invertebrates of such set-ups. Depending on the species and individual, a new pygmy angel may begin to pick at live corals, especially if unaccustomed to prepared aquarium foods. The Lemonpeel, Colin’s, Bicolor (C. bicolor), and Keyhole Angelfish (C. tibicen) are known to cause damage to invertebrates, while the Coral Beauty, Flame, Multicolor, Herald’s (C. heraldi) and Golden Angelfish are questionable additions and should be monitored carefully.

Species Not Suitable for Aquariums

A number of species of pygmy angel are often considered difficult or impossible to keep in captivity. There are several possible reasons for this. Malnutrition is probably the major reason why species such as the Potter’s, Multi-barred (P. multifasciata), Midnight (C. nox) and Colin’s angels (C. colini) do not fare well in captivity. All of these species have specialized diets that are difficult to provide. For species that occur in deeper waters (e.g. C. colini), decompression-related maladies could also be the cause.

The most common symptom is an inability to maintain buoyancy due to a damaged swim bladder. Deepwater fish will experience a swollen swim bladder when brought up rapidly. Collectors usually relieve the swollen bladder by puncturing the it’s sidewall with a hypodermic needle, releasing the gas. This can damage the fish, if done improperly. The wound and swim bladder is prone to infection causing further buoyancy problems and death.

Cryptic species, such the Golden Angelfish (C. aurantia), are frequently captured with sodium cyanide. This poison impairs oxygen transport by the blood, damages the lining of the digestive tract and blocks liver function. Mortality estimates of cyanide-caught fish from reef to retail exceed 90 percent (Rubec, 1986). Generally fish collected and imported from Hawaii, the Solomon Islands, Fiji, Tonga, the Maldives, the Cook Islands, Christmas Island, Palau, Tahiti, Africa, Australia, Florida, Brazil and the Caribbean are considered to be cyanide free.

Stress factors, such as handling, malnutrition or sub-optimal environmental conditions, will also create physiological imbalances. The eventual result of these disturbances can be a decreased resistance to infectious organisms (see Spotte, 1992) leading to disease outbreaks, particularly Cryptocaryon irritans, “ick”.

The bottom line when purchasing Centropyge is to know your source. Deal only with reputable dealers who have a track record of providing quality fish and who import fish from collectors and regions that practice proper collecting and handling techniques.

Single pygmy angels are generally well behaved in community-structured aquariums. However, there are some exceptions. Members of the argi complex (C. acanthops, C. aurantononotus, C. resplendens) are considered to be very aggressive. Though less severe, the Flame, Multicolor and the Half-black Angelfish also can be hostile towards their tank mates. More aggressive pygmy angels should be housed in larger aquariums and introduced after passive fishes.

Hostility becomes more intense towards members of their own kind. To keep several species together they should be different in size, housed in a large tank (75 gallons or more) and provided with lots of hiding places. The larger, most passive species should be introduced first and the smallest, most aggressive ones last. Using this method I have kept 5 species together in a 120-gallon tank with only minor territorial disputes (largest to smallest: Potter’s, Lemonpeel, Flame, Multicolor, Fisher’s Angelfish).

Even for those of you not interested in propagation, keeping a pair or small harem of pygmy angelfishes is still very worthwhile. Their elaborate reproductive behavior and lively interaction will add an entirely new dynamic to your aquarium community. Keeping two or more Centropyge members together is quite easy when their social structure is appropriate.

To form a Centropyge pair, select a large male or female and a smaller female. A trio, with an additional even smaller female, will also interact peacefully. When maintaining larger harems in average aquariums (less than 100 gallons), social disputes and lack of spawning sites can become a problem. Place your fish together at the store to determine if they get along. I usually do this in a container with ample swimming room, like a 10 or 20-gallon tote. After a few minutes observe their behavior. Individuals attacking each other ferociously are unlikely to form a pair bond.

So how do you distinguish a male from a female? Fortunately, most Centropyge species show some form of sexual dimorphisms, dichromatisms or both. All it takes is a trained eye and to know what to look for in each species. The most obvious morphometric difference is size, with males usually being larger than the females. This holds true for the entire genus. Remember though, small males do exist in cases were females were given the chance to undergo sex change early so sexing based on size is not always accurate.

Sexual dichromatisms are quite variable among the genus. Most species display differences during courtship, many are permanently dichromatic and some even are both. Depending on the species, temporary color disparities during courtship occur in the form of a subtle to obvious color loss over part or all of the body in either the male or female. This is also referred to as blanching. In a few species, the male or female may also show more intense color markings in addition to becoming paler. Permanent sexual color differences have been documented for 10 Centropyge species (C. ferrugatus, C. shepardi, C. replendens, C. potteri, C. tibicen C. loriculus , C. flavicauda, C. interruptus , C. heraldi, and C. joculator). I have also noted differences for two other species. C. fisheri males have a darker abdominal area than the female and C. flavissima males have slightly more blue surrounding the eyes and in the lower mouth region. I’m convinced that all Centropyge species can be sexed to some degree.

Picking a healthy individual is important, especially for breeding purposes. A fish’s journey from collection to the retail store is a traumatic one. Removal from its natural habitat, decompression, handling, packaging, long flights, and acclimation to numerous holding facilities are stresses that will weaken a fish’s natural resistance and immunity at a time when it is exposed to a variety of diseases. Centropyge that are improperly collected, conditioned or shipped are likely to develop a sickness by the time they arrive in the retail store.
Observe the behavior and external appearance of your potential buy carefully. It should be inquisitive and react to you presence. Respiration at resting should not exceed two opercula beats per second. Look for injuries endured during capture, holding or transport such as cuts, needle marks, abrasions and missing scales. The clinical signs of a sick fish may include overall paleness, red patches or lesions, decaying fins, turbid eyes, paleness, grossly swollen abdomens (unless a gravid female), popping eyes, and any abnormal skin growths or attachments. Individuals that are swimming frantically or without coordination around the tank, are scratching against surfaces or are just hanging in a corner should also be avoided.

In some cases when the damage or disease is internal, signs may be absent. This is especially true for fish collected with sodium cyanide. Unfortunately, this poison is still frequently employed in places like the Philippines and Indonesia, especially for difficult-to-catch cryptic species like some pygmy angelfishes. Afflicted fish either die within a few weeks from acute toxicity or undergo a slow death over 6-10 months from extensive liver damage. Know where your fish came from before you buy them.

An ounce of prevention is truly worth a pound of cure when it comes to keeping disease out of your valuable community or breeding systems. A two to three week quarantine period of close observation is absolutely essential to allow any residual diseases to develop, be identified and treated. During this time the fish can also be paired and weaned onto aquarium foods. A dedicated 20 or 30-gallon tank equipped with a small power filter capable of mechanical and biological filtration is ideal for two or three pygmy angelfishes.
Quarantine is a time of healing and stress should be kept to a minimum. My tank has an established biological filter and contains a few PVC pieces for hiding. Dividers are used to separate the fish for at least a day or until hostility subsides and pairing is established. Lighting is initially kept low.

Like most marine aquarium fishes, Centropyge are susceptible to a variety of common diseases including saltwater ich (Crytocaryon irritans), marine velvet (Amyloodinium sp.), trematode worms and bacterial infections. Many of these are not visible in the early stages of infection. As a preventive measure my fish are treated with a five-minute formalin bath before they are introduced to the tank. If they remain in good health they receive a precautionary in-tank treatment of formalin and nitrofurazone during the remaining three days of quarantine. When a disease develops I identify it and treat accordingly.

While larger marine angelfishes require aquariums of a minimum of 100-gallons, individual pygmy angel adults up to 4″ in length, can be housed comfortably in 30-50 gallon community tanks. Being secretive by nature, they should be provided with ample hiding places, especially if kept with more aggressive fishes.

Water quality for pygmy angels is critical and should be carefully maintained. Keep the specific gravity between 1.010 to 1.024, ammonia and nitrate levels near 0 mg/L and nitrate levels below 50 mg/L. Water temperature preferences depend on the latitudinal origin of the species. In general, those inhabiting tropical regions thrive at temperatures between 26 and 28º C water, while those in sub-tropical regions require lower water temperatures, between 23 and 26º C.

Like most grazers, the dietary requirements of Centropyge include algae, which should be provided on a regular basis. Encouraging natural algae growth, such as golden diatoms, is optimal. Terrestrial vegetable matter (peas and spinach) has reasonable nutritive value but should not be fed exclusively over products containing natural marine algae. Other excellent nutritional sources include shredded seafood (clams, shrimp, fish, scallops) mysid shrimp and enriched adult brine shrimp (Artemia sp.). Live and frozen adult brine shrimp, is a very useful “start-up” feed for fish refusing to eat. However, care must be taken because this food may harbor diseases and is low in protein compared to other foods such as frozen mysis, and therefore does not make for a good long-term diet.