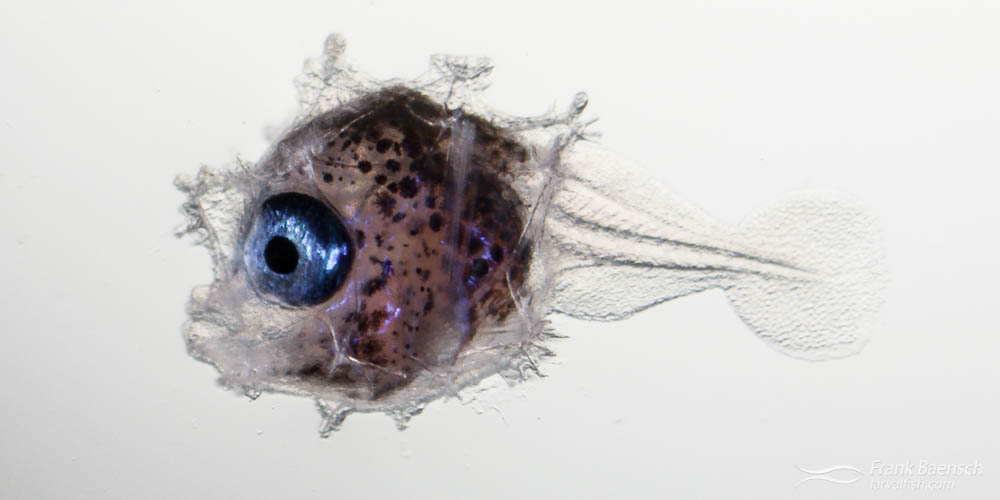 The molas (Family: Molidae) are large, unusual, epipelagic, circumtropical to circumtemperate fishes; comprising just 4 species in 3 genera. They are the largest and most fecund of the ray-finned bony fishes, with the ocean sunfish (Mola mola) reaching up to 3.3 m (11 ft) in length and 2,000 kg (4,400 lb) in weight and producing up to 300,000,000 at a time. Molas are capable of diving to depths greater than 700 m (2,100 feet). They feed on squid, small fishes, gelatinous plankton and benthic invertebrates. Molas have not been aquacultured.

The Slender Mola (Ranzania laevis) was reared from 21 eggs collected in waters off Oahu’s southeast coast in January 2013. Slender molas live solitary or in small groups far offshore and are the most colorful and rarely encountered of the ocean sunfishes. Occasionally, they wash up on beaches from storms. Unlike other molas, this longer bodied species never reaches more than one meter (3 feet) in length.

Ranzania laevis eggs are spherical, contain 20-30 yellow oil globules and measure about 1.5 mm in diameter. Incubation of the youngest embryos lasts up to 5 days at 27C. The mola larvae appear similar to boxfish larvae at hatching (2 mm TL) but develop pronged spines on the head after 2 days. First feeding occurs at 3 dph (2.6 mm TL). Near about 10 dph (2.7 mm TL), R. laevis larvae become more rotund and develop large pyramid-shaped spines on the body. Molas never pass through flexion since they do not possess a caudal fin. The notochord tip (urostyle) and surrounding tail tissue atrophies. This event was observed approximately 20 dph (7.2 m TL). By about 35 dph (7.5 mm TL), the “pseudocaudal” or clavus fin formation is complete. At this time, the pyramid-shaped spines diminish significantly and the larvae look more like juveniles.

R. laevis larvae are relatively easy to raise on copepods but exhibited a diving escape response in the later stages. This made creating a suitable environment tremendously challenging (especially in shallow tanks) and proved to be a major culture bottleneck. Cultured molas would have significant value for public aquariums since young, disease-free molas are difficult to obtain from the wild. This is the first documented rearing of a mola species through the late larval stages.