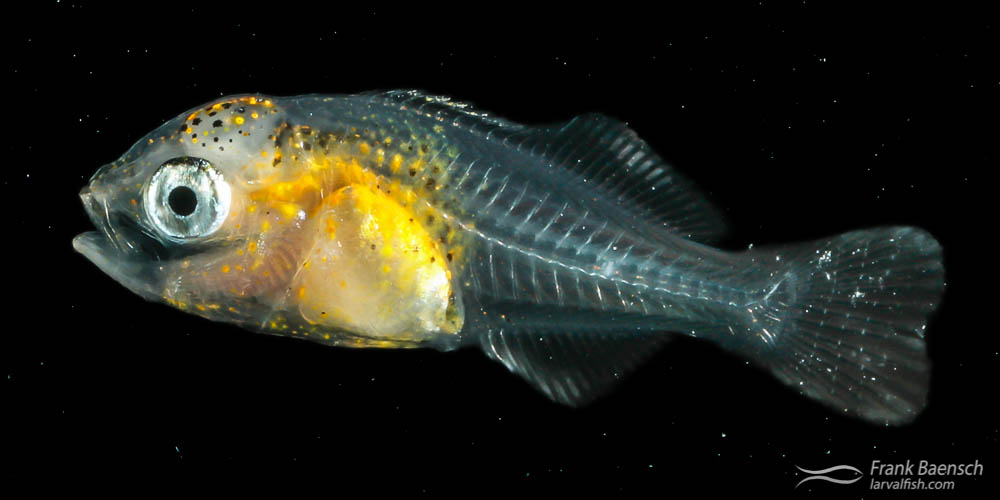 The knifejaws (Oplegnathidae) are a small family (1 genus; 7 species) of subtropical to temperate fishes native to the Indian and Pacific Ocean. Adult knifejaws have a moderately deep and compressed body with a short pointed snout and teeth fused into a beak-like structure similar to parrotfishes – but the two families are not related. They use their beak to feed on sea urchins, barnacles and mollusks. Several knifejaw species are fished commercially and are aquacultured. Two species, Oplegnathus fasciatus and O. punctatus, are known to occur around the Hawaiian Islands, though mainly at the northwestern chain.

Spotted Knifejaw (Oplegnathus punctatus) juveniles were raised from eggs collected in coastal waters off Oahu, Hawaii in April 2014. The eggs have a light amber coloration and measure about 1 mm in diameter. Development of this cooler water species is rapid at 26-27 C. O. punctatus larvae are about 2.6 mm TL at hatching. They begin to feed on 60-80 um copepod nauplii by 2 dph (3.7 mm TL); undergo flexion between 7-9 dph (7 mm TL) and begin an extended pelagic juvenile phase by 20 dph (13 mm TL). Survival is high on a live copepod diet (0% mortality after 5 dph). The juveniles were reared to 100 dph (90-100 mm TL) on frozen shrimp, adult artemia, and mysis.

Spotted Knifejaw larvae  are hardy and robust and rank among the easiest fish reared for the larval fish project to date.