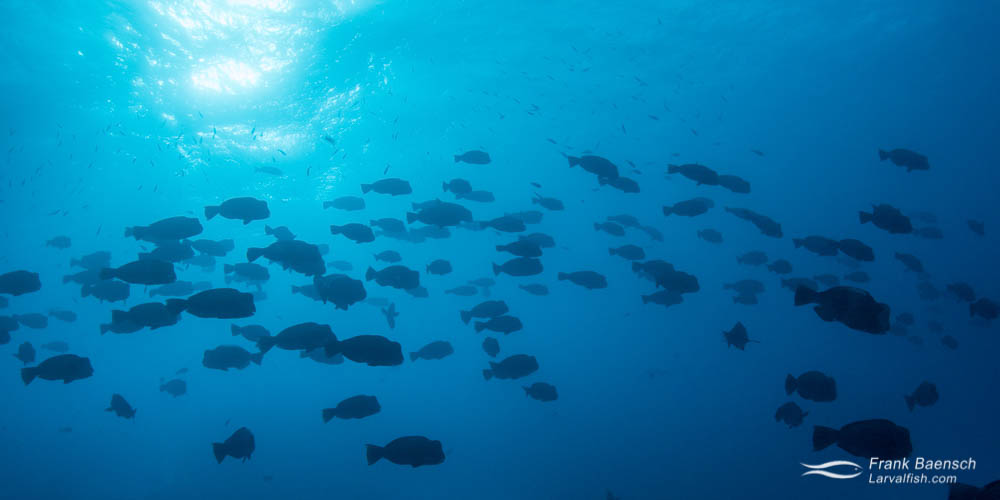 Coral reefs are complex and extremely variable ecosystems. Reef fishes have evolved a fascinating and diverse reproductive biology to maximize survival of their offspring in this harsh environment. Generalizations will have to be made to keep this an introduction to the topic. The majority of reef fishes:

The social organization of reef fishes varies enormously not only between different species but within the same species as well. The variation is a direct result of the diversity of the reef environment. Fish of a particular species can be found singly, in pairs or in groups, depending on the amount and nature of available habitat, food and potential mates. The spawning organizations of reef fishes reflect this social plasticity and fish’s need to reproduce. Four main systems have been identified.

Most reef fishes are hermaphroditic which means they are capable of changing sex. This gives them a better chance of finding a mate to reproduce with. Three types of sex change are found among reef fishes:

Simultaneous hermaphrodites are fish that possess both reproductive organs throughout adulthood and are thereby able to release either eggs or sperm while spawning. Hamlets and some snapper species have this physiology. Most reef fishes have separate sexes, except for a brief transition period (sequential hermaphrodites). The most common form is protogyny. Here a fish starts out as a female and will change sex under advantageous social conditions, for example, in the absence of a male. This condition is characteristic of the dottybacks, wrasses, angelfishes, basslets, hawkfishes and many other families. Quite the opposite is true for clownfishes where the fish starts life out as male and will change sex if the female is absent. This is referred to a protandry. Generally, in protogynous fishes males are larger, while in protandrous fishes females are larger. In both forms sex change is believed to be irreversible. Some goby species are actually able to change sex in both directions in order to reproduce with the right mate.

The life cycle of reef fishes basically involves an adult stage, an egg stage, a larval stage and a juvenile stage. These have a wide range of characteristics that have evolved as a direct result of the reproductive strategy each species has developed to maximize survival of its offspring. The basic reef fish life cycle is as follows:

Adult reef fishes have functional reproductive organs and are therefore capable of reproducing or spawning. Reproduction is dependent on the development of primary sexual characteristics, which are the male testes and female ovaries (sperm and egg producing organs) and secondary sexual characteristics (non-gonadal) such as breeding colors and spawning behavior. The development of these characteristics is stimulated or inhibited by hormones, which in turn are externally controlled by social conditions and environmental cues, particularly light period and temperature.

Most reef fishes are oviparous, meaning that the eggs develop outside the female’s body. The main structures of a fish egg (pelagic egg) are shown below:

Egg size and developmental times vary greatly from one reef family to the next. Eggs can range anywhere from 0.4 mm (rabbitfishes) to 2.5 mm (marine catfishes and some cardinal fish species) in size and take anywhere from a few hours to several weeks to develop and hatch. The general trend is that egg size is directly related to developmental time and inversely related to temperature. Therefore larger eggs take longer to hatch and eggs hatch more quickly at higher temperatures.

There is tremendous variation in hatching size, rate of development and special distribution between the larvae of different reef fishes. However, by and large, they are fragile, primitive and migrate with the zooplankton in the open ocean.

Predators, low food levels and poor currents are some of the challenges a larva must prevail over to become a juvenile. It is estimated that survival from egg to juvenile is far less than 1% for most reef fish species.

At hatching, the larvae of most reef fishes range from 1.5 mm to 5 mm in length and are usually clear or camouflaged to avoid predation. They can take a a week to several months to develop  into juveniles, migrating with the zooplankton they fed on. Generally, species that produce larger eggs have more developed larvae and take less time to become juveniles.

When larvae sense they are ready to transform into juveniles they  passively use the currents and/or actively swim to return to the reef using specific cues to guide them. These cues are thought to include sound, waves, chemoreception, olfaction and visual location of reefs. After choosing their habitat; they settle, hide and undergo metamorphosis. During this intense transformation in body form and behavior they change from fragile, clear or silver planktonic organism to a tough and colorful miniature adult.

Once a fish larva has fully completed metamorphosis it is considered a juvenile. Depending on the species and surroundings, this transformation can take anywhere form less than a day to several months. Most reef fishes metamorphose in less than a week.

Metamorphosis is a critical time for fish larvae. They loose their camouflage and invest enormous amounts of energy to develop the body form and characteristics of an adult fish. This makes them very vulnerable to predators. They therefore spend the daytime in hiding and only travel at night, in case they choose to relocate to a more suitable habitat.

As juveniles grow and become better at feeding and escaping predators they hide less and interact more with other members of their own species. Depending on the species, sexual maturity is reached within a few months to several years after settlement. Once sexually mature, juveniles are adults.

Reef fishes have developed a diversity of reproductive strategies to maximize survival of their offspring.

Pelagic spawners shed their eggs directly into the water column after rising off the bottom. Such eggs are usually small, transparent and spherical and always slightly buoyant which allows them to be dispersed by currents.

Pelagic spawning is the most taxonomically widespread spawning strategy among reef fishes. It is characteristic of thirty-six reef fish families, including popular aquarium fish groups such as the tangs and surgeonfishes, butterflyfishes, wrasses, dragonets (pictured above), hawkfishes, and marine angelfishes.

Demersal spawners, by contrast, lay their eggs in a pre-selected area on the bottom and care for them until they hatch. The area and nature of the nest depends on the species. The majority, like the damselfishes (pictured below), blennies gobies attach their nest onto a substrate.

A few groups lay eggs balls (e.g. dottybacks), others build nests to hold their eggs (e.g. fairy basslets), and some even brood their eggs orally (e.g. most cardinal fishes) or in a pouch (e.g. seahorses). In all cases the male incubates and defends the eggs until they hatch. A few reef fishes, like the rabbitfishes, are egg scatterers and spawn sinking (demersal) eggs that are randomly scattered across the bottom.

Fecundity and the survival of reef fish offspring are usually inversely related. Generally, pelagic spawners place their reproductive effort into spawning frequency and/or egg numbers, producing large numbers of eggs with a spawning season. For example, the pygmy angelfishes spawn every evening each time producing up to 2,000 eggs. Groupers spawn less frequently but when they do they produce millions of eggs.

Pelagic eggs are usually tiny (less than 1 mm for most pelagic spawning species) and soon after being fertilized (usually within 24 hours). At hatching the larvae are small and poorly developed and therefore have a slim chance of survival. Pelagic spawners therefore reproduce at times when environmental conditions maximize survival of the offspring. Many spawn at dusk to avoid predators. Others spawn with outgoing tides so that the eggs are rapidly transported from the predacious reef environment. Still others combine this strategy with a full moon to allow the newly hatched larvae to feed at night.

Demersal spawners generally place their reproductive effort into egg quality and parental care. Demersal eggs are often pigmented, have more yolk and take longer to hatch than pelagic eggs. The newly hatched larvae are also more developed and usually go through a shorter larval phase. This gives them a better chance of survival. For example, clownfishes spawn nests near every two weeks averaging about 600 eggs per nest. The eggs hatch after 7 days during which time the male care for them. Newly hatched clownfish larvae have the physiology (functional eyes, fins, mouth, stomach ect.) to escape predators and can feed within 25 hours. The clownfish larval phase is only 10-15 days.

Angelfish larvae, by comparison, are in an almost helpless state at hatching, without pigmented eyes, mouthparts and only partially functional fins. These develop for several days (three or more) before the larvae can properly escape predators and start feeding. Angelfish larvae take from 35 to over 100 days to become juveniles.