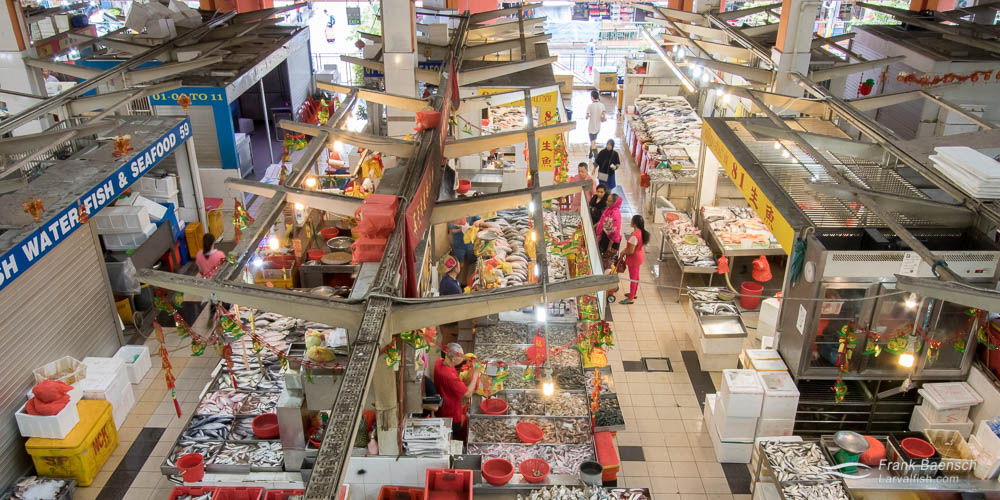 It’s 8:00 a.m. on a Saturday morning. The local wet market is bustling with people. Initially, the strong odor of recently dead fish overwhelms my nose, but this is easily adjusted to. The market’s seafood offering boasts the greatest abundance in volume and variety I have ever seen. Here there are fish from tiny to large; crabs, clams, prawns and other shellfish; dried seafood; even juvenile sharks and live eels are sold.

Wet markets are found throughout the island of Singapore. The floors are wet from melting ice and regular hosing down to clean up the blood and guts from butchered fish. The odor and wet floors can be somewhat offensive. One can only imagine what the hygiene and smells were like prior to five years ago, when the Singapore government began requiring all vendors to ice their products.

Aside from the cultural experience, I like to visit wet markets to see the seafood  people consume in different regions of the world — especially with respect to our increasingly threatened global seafood supply. There’s no better place to get a snapshot of Singapore’s fresh seafood consumption than at the Chinatown and Tekka market , Singapore’s two largest wet markets.

Chinatown’s wet market lies in the basement of the Chinatown complex and sells live crabs, lobster and exotic animals, and premium fish.

Tekka Seafood Market is larger and more open and carries a greater abundance and variety of seafood than Chinatown’s wet market. Both markets sell many of the same seafood products.

The variety and abundance of fish in Chinatown is a little less but still plentiful. More high-end species are available such as coral grouper, red snapper, salmon, humpback grouper, and Indian threadfin. Fish filets and steaks were presented on plates ,  ready to cook.

Only Chinatown specializes in live exotic animals such frogs (frog legs are a delicacy in Asian cuisine), freshwater yellow (juvenile) eels, freshwater turtles, and striped snakehead (also known as post-operation fish, for the belief that eating this fish helps with healing after surgery or injury), and live shellfish.

Few factors influencing our ocean ecosystems have as great an impact as fishing and aquaculture. According to Food and Agriculture Organization (FAO) statistics, 95 percent of the world’s fisheries are overfished close to (60 percent) or beyond (30 percent) their maximum sustainable limit. At the current rate, most fishing stocks are forecast to collapse by 2048. The worldwide decline of ocean fisheries stocks has spurred a growth in aquaculture, which now produces over half of the world’s fish. But irresponsible seafood farming comes with its own set of negative impacts.

For those of us who like to eat fish, it’s wise to choose those species that are sustainably caught or farmed. Sustainable fisheries target abundant species that can reproduce quickly to sustain their populations. They also push for environmental safeguards like constraining by-catch and reducing destructive fishing practices such as trawling and dredging.

Sustainable fish farms minimize environmental impacts like pollution, disease, accidental releases of farmed stocks, and damage to coastal ecosystems on which wild species depend. They minimize the use of wild-caught fish in the feed, a practice that puts additional stress on wild fish stocks.

“Recommended” seafood usually carries Marine Stewardship Council (MSC) or Aquaculture Stewardship Council (ASC) labels, which indicate that the seafood was responsibly harvested and farmed. “Good Alternative” choices can be bought when “recommended” items are not available, but these do have some concerns with how they’re caught or farmed. The “Avoid” category is for seafood which is unsustainable , that is,  fished or farmed in ways that harm other marine life or the environment.

To my surprise, three out of four common seafood species sold in Singapore have been flagged as unsustainable according to the 2016 WWF (World Wildlife Fund) seafood guide, which assesses the environmental sustainability of more than 41 popular and common Singapore seafood species. I was curious how the seafood sold at the Tekka and Chinatown markets ranked according to the WWF guide. This account is a purely anecdotal snapshot of seafood items available that day. 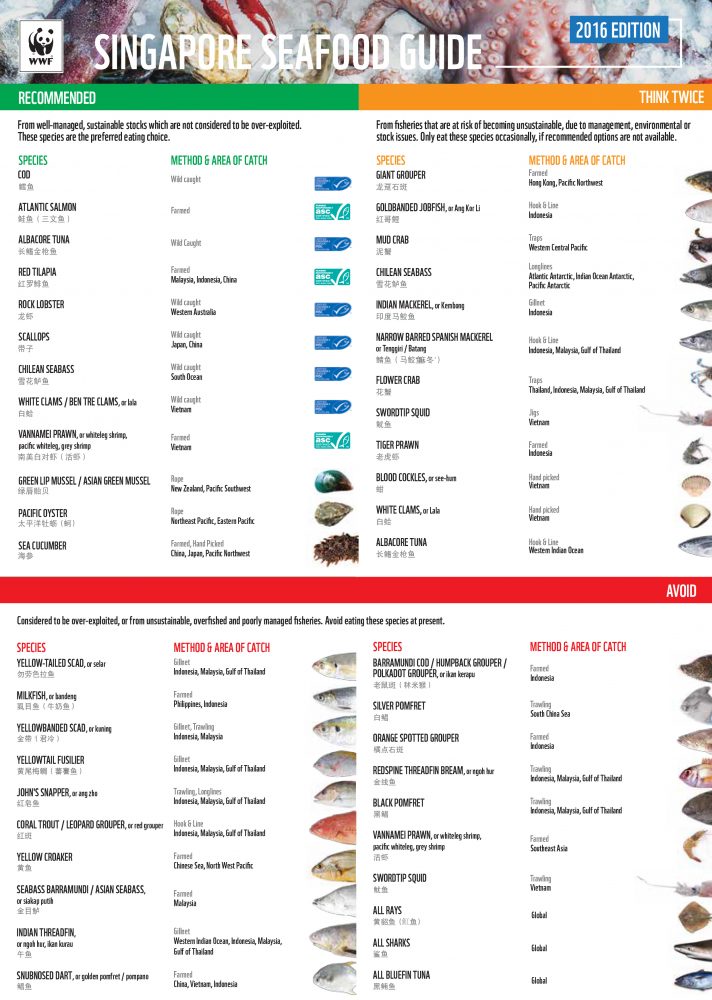 Eco certification is generally required to be listed in this category. However, none of the fresh seafood at the markets carried eco labels. “Recommended” seafood items without eco labels included farmed tilapia and Atlantic salmon, Asian green mussel, white clams, and white shrimp.

I hate seeing dead sharks, especially juveniles. Sharks are top-level predators in the ocean and maintain healthy populations of other fishes. Shark populations have been hammered worldwide, down 90 percent in just the past three decades. Worse, they’re often harvested well before sexual maturity and thus never get the chance to reproduce. These juveniles were less than one year old. Six vendors sold shark at the Tekka market. No sharks were seen in Chinatown that morning.

Coral trout (Plectropomus leopardus) was selling for about $40/kg or $18/lb.

Bowmouth guitarfish (Rhina ancylostoma) steaks were a rarity and quickly sold out. This ray species  is  listed as vulnerable by the IUCN (International Union for Conservation of Nature).

It’s clear that making environmentally responsible seafood choices is still a relatively new concept at Singapore’s wet markets. But, this is understandable. Singapore’s fresh seafood comes through the ports (Jurong and Senoko) with little traceability on fishing methods and origins, which makes eco certification difficult. While local supermarkets do stock sustainable seafood, it is mostly frozen and pricier, and choices are limited. Mandatory labels on seafood for wet markets may encourage vendors and consumers to switch to sustainable fisheries. By choosing such seafood, we are choosing a sustainable future for us and our oceans.