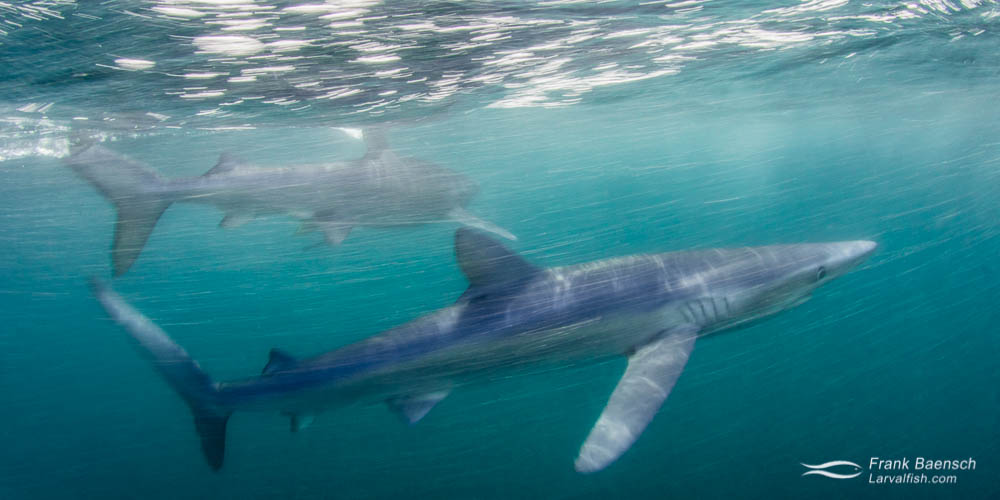 With an elegant snout, large  eyes and  a long sleek, brilliantly blue body, the blue shark (Prionace glauca) radiates grace and beauty. Blue sharks are circumglobal—they are found around the world in many different environments. They prefer cooler waters between 40–70°F and migrate long distances, such as from New England to South America. Relatively fast-growing and capable of producing large numbers of offspring, they mature in 4–6 years and have litters that average 35 pups. Squid constitutes a large part of their diet, but they also hunt octopus, fish, lobster, crabs, and even sea birds. Breeding populations are found off the New England coast during the summer months.

Back in 2010, a buddy told me about someone offering the unique opportunity to photograph makos and blue sharks off the Rhode Island coast. I didn’t believe him at first. New England waters didn’t strike me as the kind of place to swim with sharks, let alone one that provided conditions for good photos. But as it turns out, Rhode Island is one of only a handful of places in the world to experience blues and makos together in the wild and Pelagic Expeditions will make it happen. The operator runs day trips on a simple but comfortable lobster fishing boat during the summer and early fall. We headed out of Point Judith harbor at sunrise for the two hour journey to the shark grounds…

No Food. No Photos. Contrary to popular belief, sharks usually want to avoid humans and need a reason to come within camera range. Using a boatload of bait usually does the trick. Once comfortable with seeing me in the water, the shark’s curiosity took over.

I was lucky to see a blue shark being tagged. By tagging sharks, we can study their behavior and movements. For example, tagging data has revealed that female blue sharks off New England travel eastward across the North Atlantic to pupping grounds off Spain, Portugal, and the eastern Mediterranean. Male blue sharks likely remain along the American coast during the winter. Knowing migration patterns helps prioritize areas for protection and determine where sharks are most likely to interact with fishing activities. The physical examination of the shark took about 15 minutes. The gills were continuously ventilated with water during the entire process. The team attached a satellite tag on the dorsal fin, took measurements and blood samples, and removed old fishhooks.

Hook, hooks and more hooks. About one in six sharks had been previously caught. By-catch of longline and driftnet fisheries kills about 20 million blue sharks every year — more than any other shark species. Once the most common shark in the open ocean, blue shark populations are now designated as “near threatened”.

Sharks are important to maintain the health of an ecosystem and its genetic diversity. As top level predators and scavengers, sharks remove sick and weak animals and keep animal populations lower on the food chain from over-consuming their resources. Shark tourism is big business worldwide. A shark is worth up to 200 times more alive than dead. Yet, they remain unprotected.

I made this trip specifically to photograph blue sharks at twilight— a magical time to spend with these graceful animals. Here are my favorite images about sharks in Rhode Island: