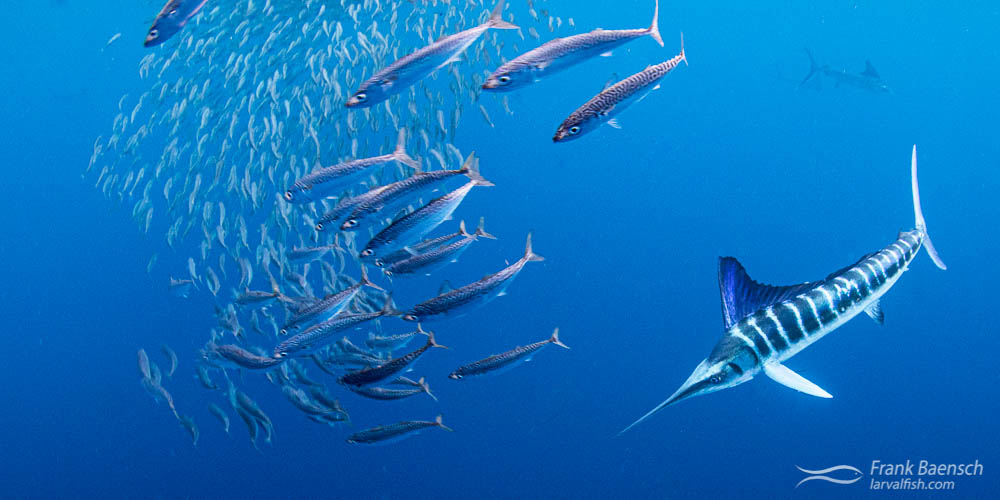 Cormorants hunting underwater. Aggregations of marlin slicing through baitballs.  Mobula rays cruising below by the hundreds. Sea lion pups playing just inches away. For intense, dynamic and unusual wild animal encounters of the salty variety, Mexico is the place.

The waters off the Baja Peninsula are highly productive. Seasonal nutrient-rich upwellings induce phytoplankton blooms that foster high densities of foraging species. This massive low level biomass supports one of the densest and most diverse populations of predatory fishes, marine mammals and sea birds on the planet. In November, I joined my friends of Unique Dive Expeditions for a trip to two of Baja’s marine life hotspots – Los Islotes and Magdalena Bay.

Los Islotes are two small, guano-covered islands, located on the northern tip of Espiritu Santo National Park, about 1.5 hours by panga (skiff) from La Paz (Sea of Cortez/Gulf of California). The site is famous for sea lion interactions but the fish and bird life here is also amazing.

We were lucky. A huge school of sardines had taken up “shelter” in the shallows, creating a feast for snappers, jacks, and small tuna; boobies, pelican and cormorants; and sea lions.  It was surreal to watch (and quite challenging to shoot) the baitfish form complex, flowing shapes while being hunted…

The two craggy rock islands are home to about 400 sea lions. Females give birth in the summer. Early autumn is breeding season and the time of year when the unruly bulls require the most space. The pups are always curious, confident and interactive and lots of fun to play with. They tucked at my hands and fins; and wrapped their little flippers around my legs and arms. They even managed to change my camera settings a few times…

Los Islotes is home to more than sea lions, sea birds and sardines. The site is buzzing with fish life. According to fish counts, Los Islotes harbors close to 80 species, the highest number in the La Paz region.  Being my first visit to the Sea of Cortez,  this place was a treasure trove of fish discoveries…

Three hours by car clear across Baja from La Paz lies the small fishing village of Puerto San Carlos, our gateway to Magdalena Bay. Magdalena Bay is the meeting place of two influential ocean currents; the cold California Current coming from Alaska, and the warm Equatorial Countercurrent from across the Pacific. The mixing of these two currents creates conditions that support one of Mexico’s most biodiverse marine ecosystems. Thousands of sea birds reside here, as do four species of sea turtle and 161 species of fish. The bay is most famous for California gray whales that migrate here during winter to mate and calf. We ventured here for the billfish!

Every fall, in the open ocean far outside the bay, an abundance of Spanish sardines and tinker mackerel attracts a host of predators. The most incredible of these are the large schools of striped marlin (Kijikia audax) that travel here during their annual southward migration to escape the cooling northern waters. Watching up to 10+ marlin methodically corral and slice through bait fish is a rush. The experience is difficult to put into words. One thing’s for sure. Seeing these majestic animals – alive – hunting underwater, makes you appreciate their value as apex predators.

It’s our last day. On the way to the marlin grounds, we see several mobula rays leaping from the water. We quickly throw on our gear. The water is green with plankton. As I dive down through the murky water, hundreds of mobula rays appear – gliding together in perfect unison. Expect the unexpected in Magdalena Bay…