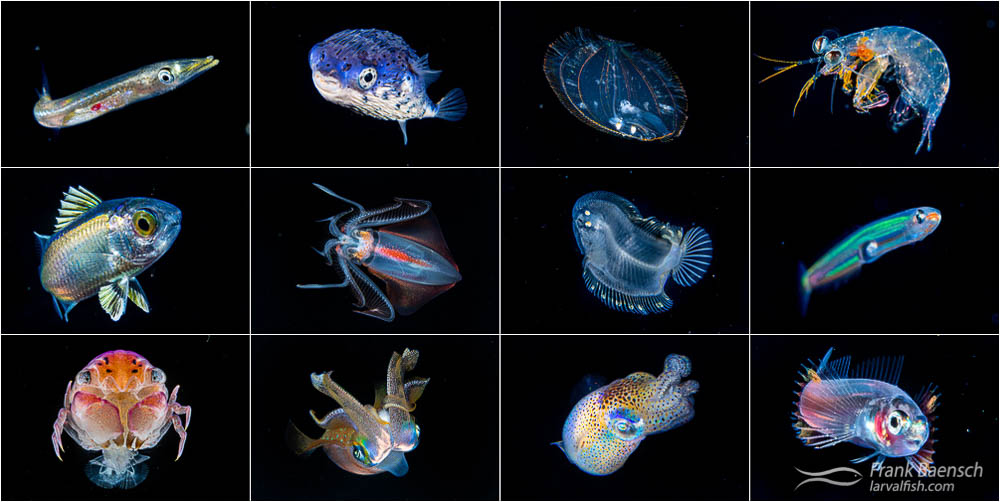 I am drifting on flat, calm seas above 1500 feet of water. It is close to 8:30 p.m., three days after the new moon. The Waikiki skyline is glimmering about three miles in the distance. A 10,000-lumen light on the weighted downline hangs near vertical in the water column. My boat is moving barely faster than the current. The conditions are  perfect for a blackwater dive – my first off Oahu.

I peer over the side of the boat. Small critters are already zooming in and out of the beam of the light. We have action! I quickly throw on my dive gear, grab my camera, and immerse myself into the dark, open sea.

My eyes adjust to the darkness. The light on the downline is buzzing with tiny plankton. Occasionally, a slightly larger animal races past—probably a fish larva of some sort. I turn on my camera’s focus light. Small, opaque objects of varying shapes and sizes appear all around me. Most continue drifting with the current. A few race away, frightened. Almost everything is alive. I feel small—like I’m in space, full of strange creatures. I’m in a pelagic wonderland.

An odd-shaped, finger-sized object with an elephant-like trunk pushes past. It’s a heteropod—a marine snail. With its largely transparent body and shell, a modified foot that acts like a swimming fin, and a trunk-shaped proboscis used to snare prey, this gastropod looks nothing like your typical terrestrial snail.

Close by, a gelatinous animal flashing rainbow colors catches my eye. It’s a comb jelly, named after its eight symmetrical combs made up of cilia. The cilia beat in a wave-like motion down the combs for propulsion. Light diffracts from the cilia, which produces the psychedelic iridescence.

A coin-shaped object reflects silver in the distance. I move closer and illuminate a larval surgeonfish, about the size of a quarter. This lucky fish was just a 3-mm speck—without eyes, a mouth, or functional fins—when it hatched 2–3 months ago. Few reef fish larvae survive the journey from egg to juvenile, often less than one in a million.

A reddish object is glowing far below the light. I drop down to near 60 feet and find a small fish gazing up, motionless. It is maroon in color with brown spots and white bars on the body and enormous pectoral fins—a larval leopard blenny! A stunning fish, and my first.

Back near the boat, I see a blue object bobbing on the surface. A close inspection reveals the distinct, turquoise-tinged gas bladder of a Portuguese man o’ war. The long blue tentacles are reeling in a tiny silver object. An unlucky damselfish larva has fallen prey. I’ve never seen that before. The man o’ war is a colonial siphonophore, closely related to jellyfish. The tentacles of adult man o’ wars average 30 feet in length. This one is a juvenile.

A translucent flounder glides past. The organs are still visible even though the fish is close to settling on the bottom. Flatfish larvae start life with symmetrical eyes, like typical fish. Near settlement, one eye migrates around the head to the other side. This fish is still a larva with eyes on opposite sides of the head. It will settle once the eyes migrates and it finds a suitable bottom habitat.

A jellyfish medusa drifts by. A couple of spooky-looking, bug-eyed creatures—no larger than a rice grain—are hitching a ride. These are hyperiid amphipods, parasitic crustaceans that often feed on salps, medusae, siphonophores, colonial radiolarians, and ctenophores. Gelatinous animals are really common on blackwater dives and so are these amphipods.

I notice a slender, transparent fish about the length of my pinky hovering near the light. I line up and take the photo. The LCD reveals a larval lizardfish gleaming with iridescence. I often see lizardfish larvae on blackwater dives, but rarely do they show this much color. I also frequently see damselfish, cornetfish, surgeonfish, scorpionfish, flounder, blenny, and cardinalfish larvae attracted to the lights, but many types of fish larvae are not phototaxic and are rarely seen on blackwater dives.

In the corner of my light beam, I see a tiny, brown-spotted cephalopod exhibiting brilliant, rainbow-like colors. It’s my first Hawaiian bobtail squid! The bobtail squid has a symbiotic relationship with bioluminescent bacteria that live in a special light organ in its mantle. The bacteria mask the squid’s silhouette making it virtually invisible in moonlit waters to predators from below. In return, the squid feeds the bacteria with sugar and amino acids.

Jump into the open ocean during the day and you will gaze into nothing but blue water as far as the eye can see. Jump in at night and you will find an epic alien world of strange-looking aquatic life. Every night the algae- and oxygen-rich near-surface pelagic waters become alive with a diverse group of zooplankton, gelatinous animals, and small fish that venture up from the deep to feed under the protective cover of the night. Before dawn, they return to the safety of the twilight zone and beyond to hide from visual predators. This vertical migration cycle is the largest daily movement of animals on the planet.

Odd shapes, sizes, and color patterns; elaborate body extensions; oversized fins and eyes; transparency; bioluminescence; reflectivity; iridescence—the host of adaptions used by small pelagic animals to survive in the shelterless open ocean environment are simply spectacular. You won’t find anything like this on the reef. Every dive leads to new discoveries. Here are a few pics from my early blackwater explorations off Oahu: